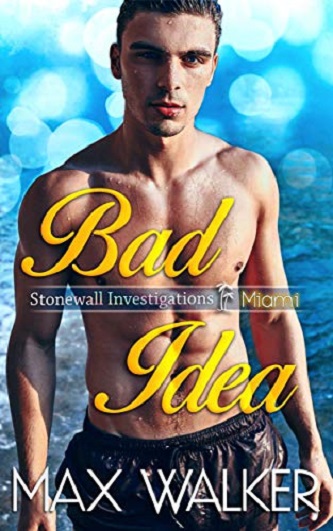 Blurb: Gabriel ‘Fox’ Morrison is starting a brand new chapter in his life. He spent years drifting after his time in the military and finally felt ready to settle in one spot. This leads him to becoming the head detective of the recently opened Stonewall Investigations in Miami. His first case is one that not only hits close to home, but the result could have huge repercussions for more than just him and his client.

It’s a case so big, he decides to enlist some help.

Jonah Brightly is ending a huge chapter of his life. Him and his girlfriend have zero spark and his professional career is in shambles after an on-work incident leaves him with more than a physical scar. A new job as a private detective would be a lifeline he so badly needed.

He goes in for his interview and meets Fox, the man who changes everything for him.

Both of them are rocked by an unexplainable force, and both are left questioning everything they’ve known in its wake. As they form a bond through working together on the case, they learn there’s much more that brings them together than holds them apart. But can they keep fanning the flames of their newfound passion or will they be consumed by the growing fire?

Review: This story is a branch off from Stonewall Investigations and I would suggest starting with that series first. Trust me you won’t be disappointed.

Fox has been out of the military for a while and is working his very first case at the agency. Stonewall Investigations has finally opened in Miami and he is not only one of the best detectives but the head detective. The case involves a pretty nasty drug that kills pretty much half of the users and started in one of his friends clubs. He is determined to find out who is behind it but when he finds out he might just wish he hadn’t. He might just need a bit of help, so lets ask the sexy man coming in for an interview.

Jonah was a brilliant detective for the police force until he was shot in the head. He was left with a few problems that might just end deadly for him. Then there is his bitchy girlfriend who so needs a boot to the ass. He needs a do-over in his life, so the job at Stornewall Investigations might be the best thing for him. That and the sexy as sin detective interviewing him. Now he has a few more questions to ask himself.

As always Max has done a wonderful job giving a great read. I only had a few issues with it. One is the girlfriend but that is obvious and I would like to put my own boot up her butt. But really the story was so focused on the love life, sexuality and hot scenes that it was hard to keep who the guys truly were. I kept getting them mixed up. Also there was the fact that it took away from the mystery itself. I was glad the guys hit it off and fireworks were in the air, but I really chose the story for the mystery and suspense so I felt a little disappointed in that part. Also the fact that the guys pushed themselves but I felt that Fox was a bit to pushy for a new guy to realize he was gay. It just seemed rushed.

Overall it was a great start to a new series and I was glad to see the original detectives show up at the party. I love how this author can give you a serious tone to it but that there is quite a bit of humor running through it. I liked the guys quite a bit and can’t wait to see what will happen in future stories. I do hope for more mystery and suspense though, really want a good juicy story to make a day interesting.

I had a blast reading this book and would definitely recommend it.