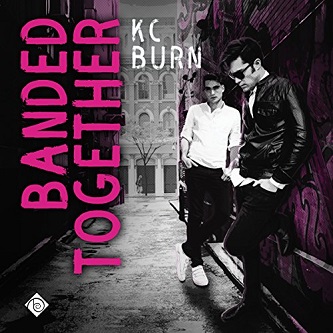 Blurb: Punk’s not dead, but it’s time to redefine life.

Devlin Waters thought he’d have music forever. But the tragic death of his best friend ended the twenty-year run of his punk band, Negative Impression. Unable to process the loss, Devlin dis-tances himself from everyone and everything that reminds him of the band. But forty-one is too young to curl up and wait for the end. In a search for a second career, he finds himself at uni-versity with a bunch of kids young enough to be… his kids. His sexy archeology professor, however, makes Devlin think about life beyond his grief….

Dr. Jack Johnson does not appreciate Devlin’s lack of respect, his inability to be serious, or his chronic lateness. Worse, he hates that he’s attracted to a student. When he realizes Devlin is the rock star he crushed on in his youth, he drops his guard—against his better judgment.

Before they can move forward together, Jack must admit to Devlin that he’s not only an admir-er, but he also sings in a cover band. How will Devlin react to his ultimate fanboy when his own music has died?

Review: Banded Together, by KC Burn is a pretty complex story that, when it comes down to it, is something awesome. I really don’t have any need to dance around the point. I like the author well enough and find it very easy to connect with Burn’s writing, although I don’t include Burn on my automatic read list (yet?).

This is a story of loss, moving on and finding a different and completely fulfilling type of love. With the mental anguish and grief which is front and centre in this story, I really loved how Stark captured these feelings. This is a great example of how an excellent narrator can keep the person in the world of the story and feel that direct connection with the main characters. Darcy Stark is a new narrator to me, I’ve not listened to the other audio I have with his narration, but that is another KC Burn book that I am looking forward to. In terms of this book, the narration was totally on point.

Devlin Walters and Dr Jack Johnson appear to be polar-opposites on the surface. Devlin is a 41-year-old ex-punk star, popular all over the world, who has turned to completing his archaeology degree after life changing events. Dr Jack Johnson is 35 and a lecturer/academic in archaeology at the university Devlin attends. He’s a little surly when it comes to students who he feels do not take their studies seriously. But on the inside Devlin is broken man, and Jack isn’t so much a prim-proper academic.

Devlin and his best friend from the age of three formed a band, they added a couple more bandmates and became world famous. However, his world shattered when his best friend died some months ago. He’s pushed everyone away, even his mother who he is now living with. Devlin is struggling with life after such a massive loss and no longer feels the music inside. When he decides to go back and finish the studies he started his first positive emotion in months is his fascination with his very hot professor.

Jack isn’t just a quiet professor with a brilliant brain, he also happens to be the singer in a cover band that performs Devlin’s songs. In fact, Jack had a major crush on Devlin when he was a teenager and Devlin was a worldwide star. However, since he has changed his appearance and out of his performing person, Jack doesn’t realise who Devlin is.

This is a slow burn romance. The men both approach a relationship with trepidation, but it is Jack who is helping piece back Devlin’s heart together. Devlin needs to learn not to shut out those that love him and come to terms with the fact that he might not want to be in the limelight again. By the end I was very satisfied and had shed more than a few tears.

Jack is a character that I relate to, at least professionally. A lot of stuff he says in terms of students is something that I’ve felt and discussed with other academics when I taught at a university. With that foot in the door, Jack was so easy to understand and get. Even though I’m a scientist, I’m interested in archaeology and my sister is a historian/archaeologist, so those profession specific thoughts is something else I found easy to relate to.

I recommend this book to those that love a slow burn romance with a touch of angst, also people that like when two men find out that they have a lot more in common than they first thought.