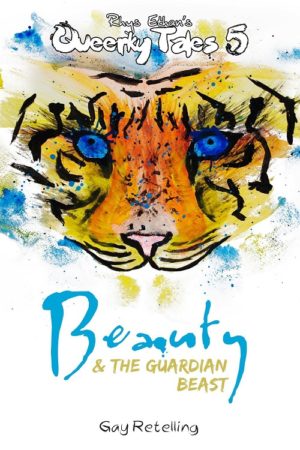 Title: Beauty and the Guardian Beast

Blurb: The classic tales you know, the characters with secrets you don’t.

Ayo is a lonely boy, bullied and withdrawn, until one day his father sends him away to the kingdom of Azizi, to study under the king’s advisor, Issa, a fearsome tiger, that thinks and talks like a man. Ayo misses his father and one day he takes it out on his new companion. The next morning he wakes up to find he is starting to turn into a beast himself and if he’s to ever turn back into his human form, he has a lot to learn.

Queerky Tales is a series of classic fairy tales retold with LGBT characters. Based on the French classic, Beauty & the Guardian Beast is a tale about oppression, kindness and forgiveness.

For children and adults alike.

Review: Ayo is a shy and sweet boy who has been bullied when one day an accident sets his life on a different path. After the king tells his father he can have anything he wishes he sends his son with the king and his advisor Issa, a tiger and prince, to Azizi.

Unfortunately while there he becomes homesick and as a result insults Issa. He turns into a beast. Demanding answers Issa calmly tells him the the city is cursed. If you hurt anyone in residence you will turn and the only way to turn back is to make amends and mean it.

Ayo learns a valuable lesson to treat others kindly. I mean why would you treat someone as you have been treated if you were bullied? You know how it feels so why make someone else feel like that. Treat others as you would have them do to you. Just because someone hurt you does not make it right for you to do the same to someone else.