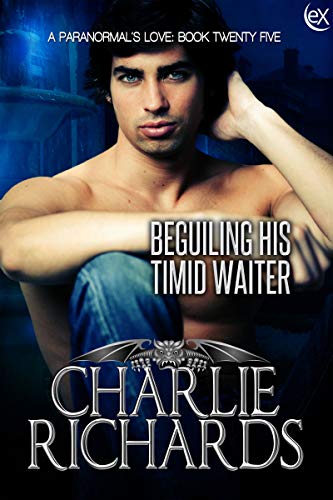 Blurb: Into the Paranormal World: While seeking out his brother to resolve family conflict, a gargoyle brought up to be a warrior discovers the opportunity for a little fun in his life.

Kinsey has watched for centuries as his father’s bigoted views tore his family apart. Seeing the rift between his parents grow wider than ever, he does the only thing he can think of to fix it, even knowing it could very well cost him his enforcer position. Sneaking into Falias clutch territory, Kinsey searches for his estranged brother, Conchlin. He finds him at a bowling alley. Once he gets in there, the scent of another quickly distracts him—the human Jimmy. For the first time in Kinsey’s life, he puts his own desires first. With some help from Conchlin, he meets Jimmy and slowly begins to woo him from the shadows. Just when Kinsey prepares to reveal the existence of paranormals and that he’s a gargoyle, his worst fears manifest—his father discovers where he’s been going and beats Kinsey to sharing the truth with Jimmy—terrifying him in the process. To top it off, his father offers Kinsey an ultimatum—stay out of Falias clutch territory forever or be labeled rogue. Can Kinsey find a way to fix the damage done by his father, or will he lose not only his family, but Jimmy as well?

Review: Each book in the A Paranormal’s Love collection features a new romantic couple. To enjoy the overall story arc and crossover characters, I would recommend reading the series in sequential order. This series is branched off from many different series. I would start off with Wolves of Stone Ridge first.

Kinsey knows his father is truly loosing his mind. It is destroying his parent’s mating and does the one thing that might just get his ass kicked. He goes to his brother Conchlin who is at the Falis clutch. Sneaking in is never a good thing, but he needs to see his brother for help. Then he smells the best smell of all, his mate.

Too bad his father finds him and gives him an ultimatum. Ditch the human and go home or be called a rogue. Man his father is one hell of an asshat. If you want to know what truly happens, even the sexy parts, read the book.

Charlie Richards has always been a favorite author of mine. Lets just say that she is an automatic buy for me. I have a few favorite characters in these books and they seem to always be. Excitement, action, danger and some hot sexy times are just a bit of what you get in this story and so much more. As always my attention was caught and kept through out the story.

However, and there is an however, there is a downside showing up. This story seemed rushed and a bit on the dull side to me. It just didn’t spark the same old same old with me and I missed it. It just felt like something was a bit off with the story. That being said, I still had fun reading it and look forward to reading the next book.