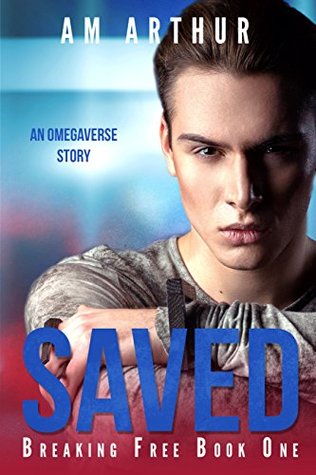 Blurb: He didn’t want an alpha to save him, but fate had other ideas…

Braun Etting was raised to know his place as an omega by his alpha father’s cruel words and fast fists, and he expects nothing but violence from the alpha who may one day mate him. His older brother Kell mated a cruel alpha who abuses him daily, and Braun is terrified of that seemingly inevitable future. When Braun’s father dies in a car crash, leaving Braun an orphan, he’s sent to a halfway house for omegas. But on his fourth night there, he witnesses a horrifying crime that sends him fleeing to the streets alone—and edging into his first heat.

Tarek Bloom is settled in his workaholic, single lifestyle, even if it is somewhat embarrassing to be a twenty-eight year-old unmated alpha. He enjoys his job as a constable, helping people and solving problems, so he isn’t prepared for his life to flip upside-down when he walks into his beta friend Dex’s apartment to help with “a problem.”

The problem turns out to be an unmated, nearly in-heat omega orphan who Dex and his husband rescued off the street last night. The even bigger problem is that Tarek feels the mating bond for this terrified omega immediately—and he’s pretty sure the omega feels it, too. But Braun hates alphas as a general rule, and no way is he giving in to the bond. All mating leads to is violence and suffering, so no thank you. But Tarek’s gentle kindness slips under Braun’s emotional shields, and Braun begins to want. To dream. All Braun has ever known is violent alphas, but Tarek is determined to make Braun trust him—and to trust in the idea of their happily ever after.

NOTE: This is a non-shifter Omegaverse story with alpha/omega/beta dynamics, heats, knotting, and mpreg. In this world, omegas are second-class citizens with few civil rights and almost no protections under the law. Trigger warnings for physical, emotional, and sexual abuse. 67,000 words.

Review: I loved this story. Braun, an omega, has lost his abusive father to a car accident. Braun and his brother Kell have not had the easiest lives. They have been abused and made to feel like they do not matter simply because they are omegas. To make matters worse the laws in their province provide no protection for omegas what so ever. This made me mad as hell. My heart broke for all the injustices these two have been through not to mention what other omegas have been made to suffer.

This is an intense and emotional story about an omega who wants all omegas to be heard and treated with respect by all instead of second class citizens with no rights. Tarek is a constable who recognizes Braun as his mate when he meets him. Through patience and understanding he lets Braun get to know him. There was a lot of cases popping up in this story. I hope we get to see the conclusion of the ones that happened near the beginning as I want to know who kidnapped all those teens and what the man running the halfway house knew about the omegas going missing and where the omegas went.

The saddest part about the entire story is Kell, Braun’s brother. He’s mated to an evil abuser alpha. At the end of this book Kell is in jail for the murder of his mate. I honestly wouldn’t shed a tear if the man did kill him as the things he put that man through for years was despicable. Not to mention giving Kell’s baby away because it was not an alpha.

The funniest thing in the book was what the mean narrow-minded alphas are called: Alphahole. I am looking forward to reading the next in the series about Kell.