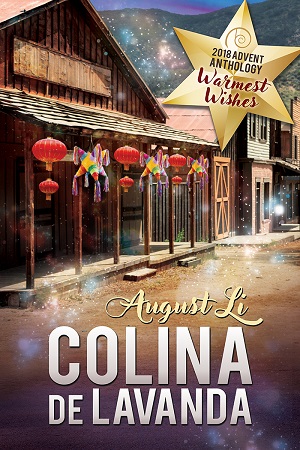 Owning a parcel of land the railroad needs to cross means Edward gets to run the border town around the station as he sees fit. What starts as a place to indulge his varied appetites becomes a haven to society’s castoffs, and if Edward encourages legends about its founder to flourish, well, he’s not so much a liar as a man who wants to protect all the cultures living in peace. Being mayor means folks might ignore his vices, but they also expect him to fix what goes wrong.

When a crushing heat wave and drought threaten not only the town’s diverse holiday celebrations but its very existence, Edward must turn to the one man he’d rather french kiss a timber rattler than face—the icily elegant Cantonese mage Edward walked out on but never stopped loving.

Review: Edward is in need of some big help and he turns to the one man who would be willing to do it, his ex. A heatwave is on them and it is natural. A beautiful town created for those that most would not except and they need to fix it.

Magical and mysterious this story gives you that. It was just a taste though and I do hope that this author turns it into a pretty cool story. The story flowed just like one would like and the characters were quite a hit with me.

I enjoyed it quite a bit. Lets just say that it was not what I expected.