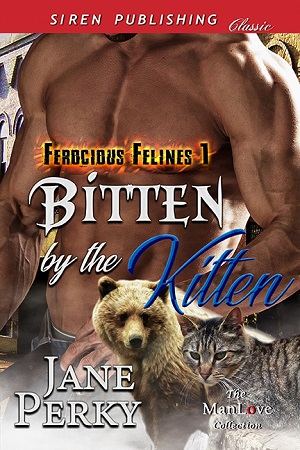 Title: Bitten by the Kitten

Blurb: Left for dead by his shifter clan, tabby shifter Steve Stone crawls into a stranger’s backyard to die. Steve doesn’t think he’ll survive the night but his unexpected savior comes in the form of recluse and ex-con werebear Damon.

Damon chose a life of seclusion for a reason. His bear’s gotten out of control but he can’t turn his back when an injured shifter collapses on his backyard. The last thing Damon expects is the inferno ignited between them.

Steve doesn’t understand his instant attraction to the big burly werebear but never has he felt more safe or loved. However, accepting Damon’s mate mark might mean endearing his werebear.

If Steve thinks Damon will bolt at the first sign of trouble, then the little tabby shifter is in for a surprise, because Damon will fight for his mate until Steve is safe in his arms.

Review: The cat clan has many harsh rules and Steve seems to break many of them. He is not as submissive as they want and he decided to help a human in need. It is a punishment of death, but he survived. He found a place to hide and in his mind to die. However something made him want to live. The place he found to hide just so happened to be a ex-con in the shape of a werebear. A werebear who was almost feral and rogue. It seems he might just save the bear also.

Damon has spent five years in a shifter prison for murder. The problem was he didn’t kill anyone, his little brother had. He had lost a part of himself in there, and now he knew he was going out of control. That is until he saves a little tabby shifter.

I have not read but a few books by this author, so I wasn’t to sure what to expect. He has a few weak spots in it and the connection was not felt between me and the characters very well. However it is a very entertaining story and I hope that the next book gets better. It has great potential to be pretty amazing. It is unique and very surprising. I am afraid that the omega and the way the others treat them was the same but they might have a way out.

I was quite surprised with it and did enjoy the book.