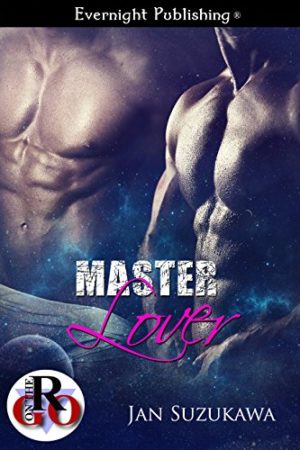 Blurb: Joon is the most highly sought after Dominant at the Humanistic Garden brothel on the Yotair pleasure satellite.

What Joon doesn’t know is that his special client has his own secret desire…about Joon.

Review: I am reading this after already having read the first of the series, and so my judgment is primarily as a series rather than standalone. Again: solid, polished writing that is in no need of editing.

The pairings are a rich blushing virgin, and a rich inventor who wants to be spanked because apparently that absolves him of his crimes. Not my type, but I know plenty of readers enjoy that.

However, we get into racial description problems right from page 1. “Dark” skin is not really descriptive beyond “not white” and has been a lazy skin descriptor of lighter folk for far too long – what “dark” means to white, white-passing, and other pale-skinned people is quite different than what is “dark” to readers who are not.

That said, I’m glad to see someone who’s not light-skinned being portrayed attractively, however briefly. I just wish it wasn’t in a stereotypically servile role, especially when there are no other characters of his portrayed race represented in higher/more respected capacities.

The clinical language used for Joon’s robotic perceptions of sex are immersive, and at points help to show a shift in demeanor.

I’m unnerved that this is the second book in a row describing a blue-eyed, Caucasian man as the type of man virtually everyone finds most desirable. Again, we have an Asian patron fawning over a constructed white guy who is beautiful because he is as white as can be. Joon too engages in this type of behavior, absolutely smitten with a white guy and his lovingly described pale skin. There is a major plot point which only further ‘enhances’ this kind of narrative, which I won’t spoil here. I understand internalized racism; it’s just gutting to see it in action.

Though it’s anime science full-throttle, the transition from robot to human reads as metaphorical to me: as someone in a highly dissociated state coming to terms with themself, their emotions and their mortality.

Enjoyed a brief nod to previous characters from the prior work without making things not make sense.