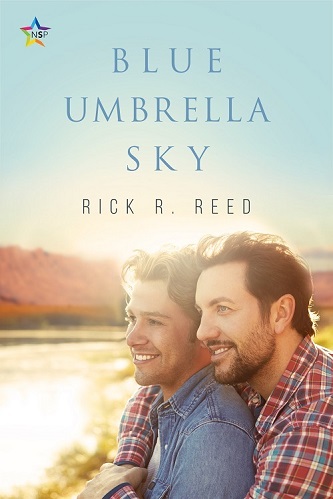 Blurb: Milt Grabaur has left his life, home, and teaching career in Ohio to start anew. The Summer Winds trailer park in Palm Springs, butted up against the San Jacinto mountain range, seems the perfect place to forget the pain of nursing his beloved husband through Alzheimer’s and seeing him off on his final passage.

Billy Blue is a sexy California surfer type who once dreamed of being a singer but now works at Trader Joe’s and lives in his own trailer at Summer Winds. He’s focused on recovery from the alcoholism that put his dreams on hold.

When his new neighbor moves in, Billy falls for the gray-eyed man. His sadness and loneliness awaken something Billy’s never felt before—real love.

When a summer storm and flash flood jeopardize Milt’s home, Billy comes to the rescue, hoping the two men might get better acquainted… and maybe begin a new romance.

But Milt’s devotion to his late husband is strong, and he worries that acting on his attraction will be a betrayal.

Review: I didn’t really know what to expect with Blue Umbrella Sky by Rick R Reed. Rick R Reed is not unknown author to me, but he is an author that I’ve never really been able to really get into his writing. I never had a problem with his stories or characters, it was just that the various books I had tried in the past I had been unable to really connect to. However, the reason that I wanted to give this book a go was because of the blurb – a colleague of mine lost her mother to early onset Alzheimer’s disease last year, with a similar family history and age to Corky in the book, so I kind of felt some connection to the story already because I had seen my colleague go through this heartbreak.

Milt, who has struggled to move on with his life after his partner died, merely exists in The Summer Winds trailer park in Palm Springs, California. He takes a long journey to healing throughout the course of this book. He deals with the loneliness, wanting to push everyone away when it seems to easiest thing to do, and feeling as though he has nothing left to give emotionally and physically to the world after giving his all to his deceased husband, Corky. Milt’s journey is one of heartache and hope but it something that I felt was representing so well and the depth of the emotions involved was not glossed over.

The man to help heal Milt’s heart is Billy Blue. Billy had big dreams to become a singer, and is hoping to find a place for himself in the world. For now he works at Trader Joe’s and lives in his own trailer at Summer Winds. He’s trying his best to get his life together and get over his problems with alcohol so that he can heal himself. Billy has just as much healing to do as Milt. Two men are neighbours, their trailers parked next to each other. The sadness of Milt calls to Billy, and he seems to see that they could do a lot more healing together than they could apart.

Blue Umbrella Sky is an intense book, which I found myself crying through off and on. Because this includes something I’ve seen distantly in my own life, I think that is why I was able to start and finish this book. I found it difficult due to the intensity but totally worth it. This is about hope and healing and finding new love when one man thought that he would never find his place in the world again.

As to my thoughts on the author, I’m not sure if this book has bumped Rick R Reed from my “mostly avoid” list, but I think I will be open to other books if anything else sparks my interest.