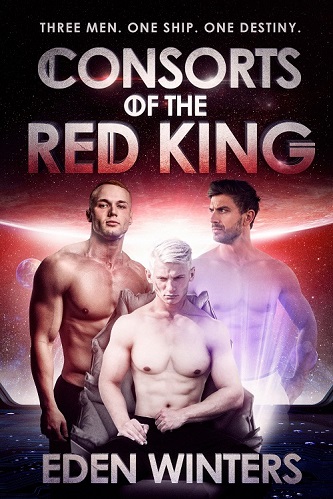 Title: Consorts of the Red King

Blurb: In deepest space the ruthless Federation lays waste to one rebel colony after another, leaving comrades-in-arms Van Orskey and Tayn Kassik without family, without a home, and without hope.

With nothing left but each other, they run contraband and smuggle fugitives from the safety of their ship, the Cormorant—with the occasional clandestine mission for the rival Coalition thrown in. Their heists have not gone unnoticed, though even the bounty on their heads doesn’t prevent them from being a thorn in the enemy’s side at every opportunity.

Pissing them off? Big mistake.

From the day of his birth Prince Jorvik of Akiak learned duty, wisdom, and honor from his father, leaving him ill-equipped to withstand betrayal by his Federation-puppet uncle. He has no love for the greedy off-worlders who plunder his world’s natural resources and enslave his people. To defeat his foe, he needs the cunning, fearlessness, and touch of treachery only outlaws can offer.

Two off-world mercenaries make unlikely partners in Jorvik’s quest for vengeance, but the more he learns of them, the more common ground he discovers. In each other’s arms they find passion, heat, and maybe, a reason for living—until their common enemy threatens to tear them apart.

To survive, they must take on the corrupt Federation.

A standalone novel based in The Sentinel universe.

Review: Oh my god was this book brilliant.

You have Tayn and Van who are mercenaries that work for the coalition. But Tayn is confined to the ships circuitry due to his body being destroyed. Jorvik is a prince of sorts who is set to rule after his father which happens much sooner than they planned due to betrayal and the deaths of many people. Jorvik meets Van during the upheaval and escapes to plan his vengeance.

This story had so many interesting twists and turns as well fascinating characters. Jorvik’s home world is wanted by others due to the crystals the planet has. but these are no ordinary crystals. I was spellbound by the way the story unfolded. The many layers to it just blew my mind. It’s a tale about three men battling against the odds to set things right.

I just don’t know what to say without giving away to much about the book. I really hope there will be another one as with the way this one ended it seemed incomplete given some questions went unanswered. Nevertheless it was an intense story with adventure, suspense, action and love.