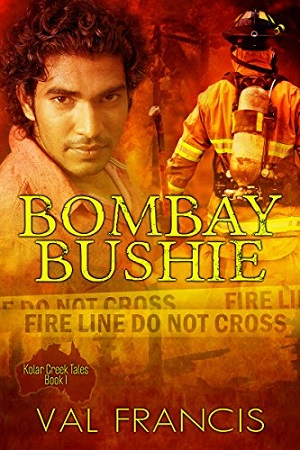 Blurb: Zech Larsson would sooner run headlong into a raging bushfire than into another relationship. Catching sight of their latest recruit, a young, Anglo-Indian guy with a head of long black curls and kissable lips, instant attraction warns Zech that he is in trouble, more so as he happens to be straight.

Exiled to Kolar Creek by his father when he was caught attempting to lose his virginity with another boy, Nathan Harris finds the idea of life in this small country town uninviting—that is until he gets an eyeful of Zech in his uniform. Sudden Nathan knows that the Rural Fire Brigade needs his services.

In Kolar Creek, the temperature is heating up, and when Nathan’s training is left in Zech’s hands, a clash is inevitable. Faced with the temptation that this younger man presents, soon other factors come into play and neither of their lives will ever be the same again.

Review: Nathan has had one hell of a life and not a good one. His mother was Indian and his father was Australian. Her parents had wanted her to marry someone from another family and when she got pregnant with Nathan they pretty much disowned her. She ended up marring the man that got her pregnant and lets just say he used his fists. He was an alcoholic who took his anger out on her and Nathan. Then he was caught with a man, you can guess what happened. He headed to Kolar Creek to stay with his aunt and cousin. They were as bad as his dad. He chose to go to work with the Rural Fire Brigade, but it would seem that the man who was to show him what to do, didn’t care for him, or so he thought.

Zech had had a nasty father as well and ended up leaving. After a disastrous marriage he just stuck around with friends with benefits, but he was not gay. That is his way of thought when he met Nathan, but his thoughts turned into a different direction slowly after. However things do not always go as one plans.

First off this story had a great direction but didn’t go in the way that would have made it top notch. The anger and violence in this story just took it to a different level. Nathan had what it took to fight fires but then the way the author wrote about him made him come off weak, to weak to fight fires. It was like a crossroads and the author didn’t know which way to take it. Now this author was new to me so I wasn’t really sure what I was getting into. So I put it off a bit longer then I should. The characters rocked pretty much, but there were certain spots that I didn’t care for at all.

I am sorry to say that this book just didn’t make the cut for me. I have a rule though, that with new authors always give their second books a chance, so that is what I would do. However I do hope that the next characters are not so broken and put back together without being true. You can’t just jump from one way to another way to fast, it just doesn’t make it believable. So far I don’t really care for this book and can guarantee that it will not be read more than once.