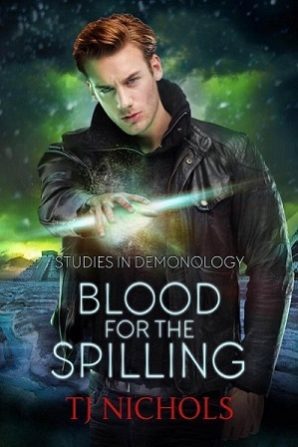 Title: Blood for the Spilling

Blurb: Sheets of ice are spreading across the human world, ushering in an ice age as the magic drained from Demonside turns that world into a desert. Angus and reluctant warlock Terrance have defected from Vinland to the Mayan Empire—a land of dark and potent magic. But the Mayans aren’t offering sanctuary for free.

Nor is the world willing to stand back as Vinland attacks, and the backlash will affect all magic users.

Mage Saka has no tribe. He is now just another refugee fleeing the dying Demonside. He knows the conflict brewing now will be worse than the first demon war. Countries are banding together—not just against Vinland, but against all magic. Where will the powerful Mayan Empire stand?

Angus might have the power to fight Vinland and the Warlock College, but the cost will be terrible. Saka is torn between helping Angus and stopping him. And Terrance would do anything for Angus, but he’s terrified of the man Angus is becoming, even as Saka is warming to the idea of a relationship between the three of them.

No matter what choice they make, victory will be bittersweet, and when the ash settles and the snow melts, nothing will be the same.

Review: This is a culmination of the previous two books. Angus, Terrance and Saka are fighting to keep the worlds from being destroyed. It’s a journey into finding out what they are capable of and the reason they are slowly driven to be together at times.

I loved everything about the book. From Angus’ life and what he discovers to Saka and his fight with his own feelings as well as the struggle the three face throughout. It was a well written thought out story that immerses the reader in an awesome series.

I do not want to give away to much so I’ll leave my review with saying it was a great journey.