Hi guys! We have Foster Bridget Cassidy popping in today with her new release Breaking His Spell, we have a great excerpt and a brilliant $10 NineStar GC Giveaway, so check out the post and enter the giveaway! ❤ ~Pixie~ 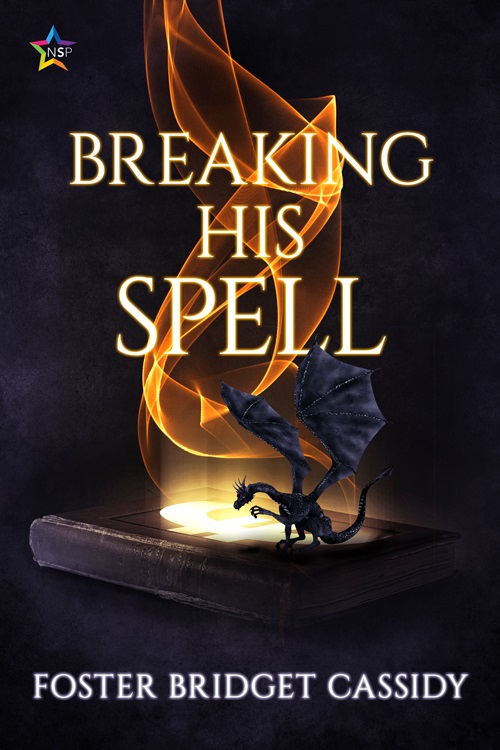 Klint doesn’t believe in true love. As an Alma, an immortal magician, he knows such feelings can’t last forever. The death of his mortal lover almost a hundred years ago proved it. But Klint’s resolve gets put to the test when he’s tasked with saving a prince from a dark spell. With Carishina, his friend and fellow Alma, in tow, he sets off for Terius.

Carishina’s ideas for breaking spells differ greatly from Klint’s. While he tries potions, Carishina tries kisses. Only one of them will succeed.

True love. There were no other words in all the world as deceitful as those.

In my youth, I had believed.

I sought to find that one person to complete me. As a newly trained magician, the Alsa Alma sent me to tutor the third youngest prince of the Farlerotna Kingdom. In the palace, I watched Prince Vulten grow. I was his constant companion in study and in play. The prince had a devious mind, and we spent hours thinking of ways to trick his older siblings.

And on the day he turned eighteen he’d confessed his love for me. Shocking, to say the least, because I’d come to love him too.

True love. Or so I thought. Except, how could anyone truly, irrevocably love an immortal?

For the early years, we were happy. We took trips to foreign nations. We hosted lords and ladies. We played tricks on his siblings, even Rillik, who had taken the crown by then.

But as the years stretched and Vulten began to age, the love in his eyes lessened and faded, replaced by envy and jealousy. As an immortal Alma, my magic kept my body youthful.

“That,” Alma Carishina said at the end of my monologue, “is why you don’t have relations with mortals.” She leaned forward, her chin resting on her palm. She’d magicked her hair green, and the curls appeared serpentine, a gorgon with her snakes.

“No,” I countered, “that’s why you don’t have any relationships with anyone. If love could not last for eighty years with a mortal, how could it last forever with an immortal? It’s not possible.”

“And so,” Alma Franik added with a toothy grin, “you’ve turned into a grumpy old man at the tender age of two hundred.”

“I’m a hundred and ninety-five,” I fumed. “And I’m not grumpy. I don’t see the point in romance. There’s no such thing as true love.”

“I heard,” Franik stage whispered to Carishina, “he moped in the Farlerotna Palace for a hundred years before they asked for him to be taken away.”

Carishina laughed and the red in my cheeks was not all anger. Maybe I had moped, but my broken heart was understandable. I’d lost my lover, and at the same time, my childish ideas of the world. It had wounded me. I needed to reflect and get a grip on my life.

Had I really been there a hundred years? Rillik’s granddaughter—Simmone—had assumed the throne. How long had I wandered those halls, haunting them like a ghost? It couldn’t have been more than forty or fifty.

“The Alsa Alma had to fetch Klint himself,” Franik concluded with a smug smile.

“Ha-ha,” I told him sourly. “I’m not sure you have room to talk, Franik, as you’ve never even been sent outside these walls. What was it the Alsa Alma said? You ‘lacked any and all ambition’?”

Carishina snorted and Franik glowered. “As if I wanted to mingle with the mortals,” he said, drawing himself up. “I don’t ever want to get mixed up in their insignificant affairs.”

I allowed myself a small grin as Franik directed the conversation onto a new topic.

At times, I still missed Vulten. Our connection had been the one real thing in my life. As a wizard, I used unexplained solutions, backward thinking, magicking anything into reality. But with Vulten, the emotions had seemed more than magic. Better than magic.

At least I’d learned my lesson young. The pain prepared me for my lonely future.

The afternoon light shone in through the stained-glass windows, throwing splashes of color around the room. I adored the place, my favorite in the Alma Palace, a mixture of library and meditation room. Most of the time, no occupants filled the tables. Or on the occasions when they did, other magicians knew enough to leave you to your thoughts. Well, not today. Franik and Carishina had bombarded me with questions the moment I walked in.

They were young—Franik just turned ninety, and Carishina was a mere forty-six. Of course, they were curious about the gossip around the palace, and my experience in Farlerotna continuously made the rounds. Plus, many of the older practitioners didn’t have the time or inclination for dealing with the young ones. Apparently my years in the mortal world had tempered my patience.

“I hope I get an assignment soon,” Carishina said. “I’m ready to travel and see something besides these Mylforsaken windows.” The curse using the goddess’s name sounded odd in her cheerful voice.

“They won’t let you out for a least another twenty years,” I told her.

“Why not? I heard you were sent out at forty-five. I’m older now.”

I shrugged. “The world’s a much more dangerous place now, even to a trained Alma. Dark wizards are the least of our concerns.”

Her lips puckered in displeasure. “I heard there’s a prince in Terius who’s fallen under an evil spell. I want to be the one to rescue him.”

“What did I say about mixing with royalty?” I asked, exasperated. What was the point in telling them my tragic past if they didn’t heed my warnings?

“Oh, Klint,” she said fondly, reaching out to grip my hand. “Just because a relationship didn’t work for you doesn’t mean it won’t work for everybody. Or, maybe your prince was an ass who really didn’t love you at all.”

My mouth fell open. So did Franik’s. Carishina casually went on smiling at me, unaware of how tactless her words had been.

“Klint,” called a voice from behind me. I turned in my seat. Alma Peter leaned through the doorway. “The Alsa Alma would like to speak to you.”

I wrinkled my nose. It’d been awhile since I’d been summoned by the old man. After he’d come to Farlerotna and informed me I was creeping out the current royals, I’d kept my distance. Now, I hoped he had good news for me. Foster Bridget Cassidy is a rare, native Phoenician who enjoys hot desert air and likes to wear jackets in summer. She has wanted to be a fiction writer since becoming addicted to epic fantasy during high school. Since then, she’s studied the craft academically—at Arizona State University—and as a hobby—attending conventions and workshops around the country. A million ideas float in her head, but it seems like there’s never enough time to get them all down on paper.