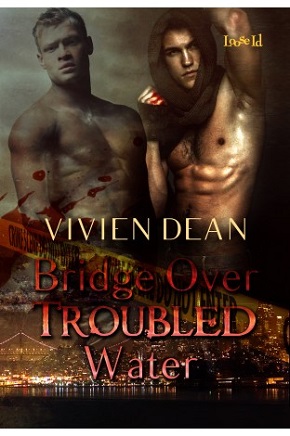 Blurb: Detective Brady Lindstrom deals in death, and not just because he’s a homicide cop with the slaughter of a century to solve. Ten years ago, vampires murdered his lover. Ever since, he’s looked over his shoulder, ready for vampires to strike again.

Exhausted and angry about the needless deaths he has to investigate, Brady worries that the killers he’s looking for aren’t even human. Those fears are compounded by an unexpected visitor, the battered and nearly broken Cole Singer, the lover he’d long ago given up for dead. When Cole offers to trade information on the killers in exchange for sanctuary, Brady realizes he doesn’t have a choice. It’s not about justice. He simply can’t turn his back on the only man he’s ever loved. Even if he’s a vampire.

Note:Bridge Over Troubled Water was previously released by another publisher but has been revised and reedited in this version.

Review: Brady’s dead lover, who was killed and turned into a vampire ten years prior, shows up on his door step. Despite his animosity he lets Cody in only to discover the case he is working on may come to a conclusion sooner than he thought as Cody has answers.

I understood Brady’s aggression to a point but after so long I found him to be a repetitive asshole to Cody. If he was so bothered by Cody why not send him packing?

The case itself was interesting. Especially when the suspects turn their sights on Brady and Cody.