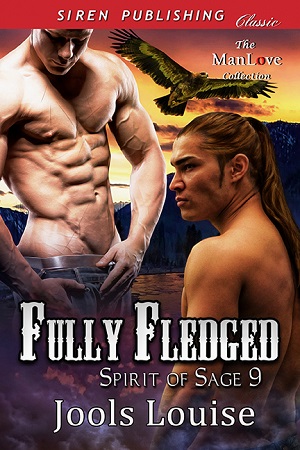 Blurb: Freddy returns home to Sage, after three years of traveling, trying to find out about the wider world. The town has expanded rapidly.

A few surprises are in store, and his world is rocked from the start by the discovery of his mate Evan, a sexy African lion shifter who’s run away from the circus – literally.

Freddy’s homecoming triggers a new discovery, a rarity in the paranormal world. He is a dual shifter, with two animal forms inside him…and both are fighting for supremacy inside him, struggling to get out. The spirit of Sage has worked its magic, and his primary form takes the lead. A golden eagle, it gives him the power of flight, a useful weapon in the fight against a powerful, brutal militia group calling themselves Flashpoint.

Fully fledged, finally, will Freddy be able to overcome the terrors of his past, walk out of his nightmares, and into Evan’s loving arms?

Review: Another fantastic installment of the spirit of sage series as Freddy, a dual shifter is featured front and center as he comes back after three years. He finds his mate in a lion shifter who ran from the circus along with others. Needless to say it’s more than the two in this story as Flashpoint makes an appearance and trouble comes knocking to Sage once again.

I simply love this series. It’s full of romance, suspense, mystery and action. Each story takes up where the last leaves off so it is best to read them in order.