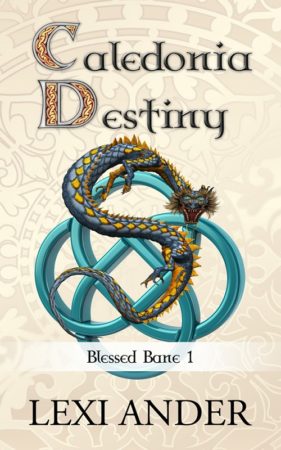 Blurb: A twist of fate changed both their destinies.

The wyrbears, once a long-lived species, were being lost to the forest in their prime. A people borne of a curse, their abilities not a gift but something wrongly taken, they nonetheless live in harmony with their animal spirits. But over time the curse they lived under changed, mutated, and now what once was a refuge from the world when they became too weary is culling mathan in their prime.

Ewen mhic Friscalach, the leader of his peoples, lost his father too early and is now a widower with four children. The vow he made as a youth to break the curse afflicting wyrbears has been buried by grief and responsibility.

Roi mhic Alric, a priest of Cerridwen and seer, watched his fellow priests slaughtered and his temple desecrated. The only thing that kept him going the last three horror-filled years was the vision Cerridwen had granted him of his emancipation. If freedom came at the cost of his life, well, he was more than ready for the Otherworld.

A fated meeting upon a bloody field of battle. A wrong done long ago. Their choices could save a people… or send them into extinction. Either way, their love will be legend.

**Caledonia Destiny started out as 31k short story that had a happy for now ending. Now, years later, I have rewritten and expanded the original to 111k.**

Review: This book was so good after I got used to way the sentences were phrased. I loved the background and the story about the two wyrs one of which wanted to travel to see the child he met.

The story became even more engrossing to learn about the curse Ewen and all those involved directly or indirectly. There was a great cast of characters that brought the story to life. As well as brilliant descriptions of the landscapes throughout.

My heart broke for Roi and Ewen and all they had been through and what was to come. I loved how fiercely protective Ewen and Roi were of each other. The amazing twists and turns kept me on the edge of my seat as I never knew what was coming though I did figure who Fordels spirit was meant for.

Well written with the right amount of drama and action plus magic and love with were thrown in made for an outstounding read that I could not put down. I am so ready for the next book to see what awaits.