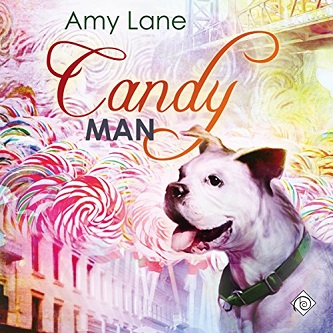 Blurb: Adam Macias has been thrown a few curve balls in his life, but losing his VA grant because his car broke down and missing a class was the one that struck him out. One relative away from homelessness, he has taking the bus to Sacramento, where his cousin has offered a house-sitting job and a new start. He has one goal, and that’s to get his life back on track. Friends, pets, lovers need not apply.

Finn Stewart takes one look at Adam as he’s applying to Candy Heaven and decides he’s much too fascinating to leave alone. Finn is bright and shiny – and has never been hurt. Adam is wary of his attention from the very beginning – Finn is dangerous to every sort of peace Adam is forging, and Adam may just be too damaged to let him in at all.

But Finn is tenacious, and Adam’s new boss, Darrin, doesn’t take bullshit for an answer. Adam is going to have to ask himself which is harder – letting Finn in or living without him? With the holi-days approaching, it seems like an easy question, but Adam knows from experience that life is seldom simple. And the world seldom cooperates with hope, faith, or the plans of cats and men.

Review: Candy Man is the first book in Amy Lane’s series of the same name. I’ve have come to enjoy some of Lane’s books. However, I had not got into this series as the ebook predates when I first discovered the author. I have a dim memory of listening to one of the books in the series, but since I had read it out of order I never gave it a chance. Seems unfortunate, but it means that I’ve made an awesome discovery for the audio book format.

The narration was performed by Philip Alces, who narrates the full series. Alces has a soft and gentle voice that matches the sweetness of the plot and conveys the variety of emotions that tumble through the MCs. It was a wonderful performance and completely on point.

Candy Man has a really cute premise. It’s about this almost hippy-like guy, Darren, who runs a boutique candy store in Old Sacramento and just so happens to have psychic visions about the people that he needs to help, i.e. people that are down on their luck and may not be looking for love but are gonna get it anyway. Really cool.

The MC that needs help that introduces us to this world is Adam Macais. He had a really shitty upbringing. His family cursed his own existence, always more than happy to tell him that he was a bastard (honestly, can’t figure out that guy’s mum). When he left to go to the army, the dog that he had loved was euthanised by his vindictive mother. When he came out as gay he was outright rejected. In the army he had thought that he had found the love of his life, but that went awry. When he left the army he went back to school, but being sick meant that he lost his VA Grant. All that he had left was a handful of belongings and a crappy car that would take him to Sacramento. That’s where his cousin, Rico, lives and it feels like that Rico is the only light in his life.

Adam is staying at Rico’s place, looking after Rico’s dog, Clopper, and the decrepit cat, Gonzo, while Rico moves to New York for six months for an internship. Adam is determined to get his life back on track. He’s in the right place at the right time because barely after a day in Sacramento he walks into the store Candy Heaven, where the strange guy that runs the place, gives him an apron and tells Adam he is where he is meant to be.

Adam meets Finn when Finn delivers food from his family’s diner. Finn is super close to his family, they are big and boisterous and for Finn there is nothing bad in the world. He is outgoing and positive. He works for the family business while going to school to become an engineer. The moment he meets Adam, Finn knows that he can’t let the guy go. Good thing that Finn is a scrappy sort of guy because Adam is going to take a lot of getting to know and convincing that he is deserving of love, laughter and happiness.

Adam and Finn have great chemistry together. They are ying and yang but as they get to know each other it is clear that they both have something that the other needs. They are kind of like Beauty and the Beast in a way. Adam is a gritty character from a hard life, but that is only what we get on the surface as Adam has a lot of things to learn in the course of this book.

The world of the Candy Man has a strange type of mystical energy that makes it so easy to get love and hope. Candy Man was a really charming book and I can’t wait for the next one. This is good for people that love a rosy, sweet romance.