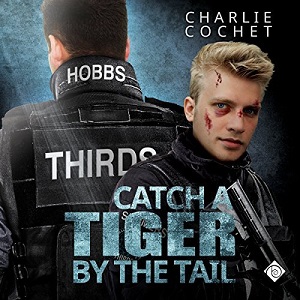 Title: Catch a Tiger By The Tail

Blurb: Calvin Summers and Ethan Hobbs have been best friends since childhood, but somewhere along the line, their friendship evolved into something more. With the Therian Youth Center bombing, Calvin realizes just how short life can be and no longer keeps his feelings for his best friend a secret. Unfortunately, change is difficult for Ethan; most days he does well to deal with his selective mutism and social anxiety. Calvin’s confession adds a new struggle for Ethan, one he fears might cost him the friendship that’s been his whole world for as long as he can remember.

As partners and Defense Agents at the THIRDS, being on Destructive Delta is tough at the best of times, but between call-outs and life-threatening situations, Calvin and Ethan not only face traversing the challenges of their job, but also working toward a future as more than friends.

Review: To enjoy the overall story arc and crossover characters, I would recommend reading the series in sequential order.

Finally after Dex’s antics and Sloan being a grumpy pants, we get to Calvin and Hobbs. These two have been best friends since they were little and that was never going to change. The only change is Calvin’s feelings for his best friend. He was in love and wanted more. However Hobb’s had so much trouble communicating with others, that he feared change. The big tiger could handle a building blowing up around him, but the moment his best friend kisses him he runs and hides. That is until Hobbs realizes he might just loose the man he loves.

It only took six books to get to these two facing their issues. You can feel the heat from these guys from book one and I am glad to see Hobbs stepping out of his comfort zone. At the same time they have a nasty case to deal with, Sparks training sessions are heating up and someone is trying to kill the. Should I add some one is trying to kill them AGAIN.

Now back to our other sexy couples, damn they are getting all lovey dovey. Ash has definitely surprised me, he is definitely no longer in the closet. Our sexy narrator has given us some amazing voices to listen to. I swear I could listen to that man all day long. He brings our characters to life and damn can he do so many different tones. I think I have listened to this book several times before remembering to do this review.

Now full warning there is a cliff hanger at the end that will have your mouth dropping opened. Even though Dex will always be my favorite, I have a special place inside for Hobbs. He has had such a difficult time with others that he pulls you in no matter what. He protects Calvin physically, where as Calvin protects him emotionally. These two just rock for me.

Charlie Cochet has became a favorite author of mine from the very first book. In fact I hate to admit that I did the audio’s before I even picked up one of her books. I love listening to our guys fight, argue, sigh if they want to and just be a lot of fun together. Who knew Dex could sing so good. I can’t wait to get my hands on the next book, it is going to be a kicker. This is one series that if I could give it a ten heart rating I would.