Hi guys! We have Andrew Grey popping in today with his upcoming release Fire and Granite, we have a short guest post from Andrew, a great excerpt and Lisa’s review so check out the post and enjoy! ❤ ~Pixie~ 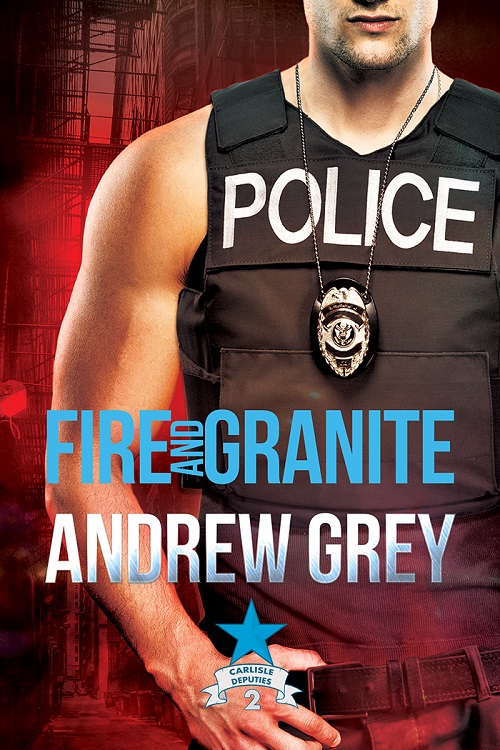 The heat is growing from the inside, but danger is building on the outside.

Judge Andrew Phillips runs a tight ship in his courtroom. He’s tough, and when he hands down a sentence, he expects to be obeyed. So when a fugitive named Harper escapes and threatens his life, Andrew isn’t keen on twenty-four/seven protection… especially not from Deputy Clay Brown. They have a past, one that could cause problems in their careers.

But with Clay assigned to Andrew and the two of them together every minute, there’s nowhere to hide from their attraction—or from the fact that there’s much more than chemistry blooming between them. As the threat intensifies, Clay knows he’ll do anything it takes to protect the people who are taking their places in his heart: Andrew and his young niece and nephew.

Fire and Granite is the second story in the Carlisle Deputies series and it’s a;ways a bright day when I get to return to my home town to write a story.  I really do love the town of Carlisle and in some way it always ends up as a character in the stories.  And let’s face it, with these stories I get to write handsome, strong police officers and that’s always a pleasure too.  So you could say that these stories are a win, win for me.  And Fire and Granite is no exception.  Clay is the big, strong type, but he also has a history with Judge Andrew.  They don’t tend to get along/  Both are strong personalities and want to be in control.  I see this with a lot of people in my life, sometimes even myself.  And just like in real life, they’ll have to put those needs aside if they are to work together in order to keep Andrew… and so much more safe. “Do you want to help me make dinner?” Of course, Petey’s kind of help was eating anything that fell on the floor. Petey’s tail wagged, brushing back and forth like a doggie dust mop. “You’ll get yours when I have mine. That’s the deal.”

Petey whined at the injustice.

Clay went to the kitchen, got a container of pasta and sauce that he’d made up over the weekend, and popped it into the microwave. He wasn’t in the mood to cook, and an evening on the sofa in front of the television sounded like a good idea. Clay also made up a small salad and dressed it with ranch. He fed Petey and settled in front of the television, eating while watching the news, changing the channel as soon as the escape story came on.

Petey joined him on the sofa, curling up next to him, his head resting on Clay’s leg.

“I know, buddy. You’re just what I needed.” He patted Petey gently on the head and stroked down his back. Petey blinked up at him with his big brown puppy eyes, and Clay was able to let go of some of the stress of his day. Few things were as relaxing as just spending some quiet time with his dog. Petey never yelled at him and didn’t expect much from him. He just loved him without judgment. There hadn’t been many people in his life that Clay could say that about.

Clay’s phone rang, and Petey barked, then growled. He hated the phone, especially when it interrupted back-rub time. Clay checked the number and answered. “Sheriff, what can I do for you?”

“I wanted to call and tell you that Smith is awake and responding to treatment. The bullet didn’t enter his brain, but it did a lot of damage. They still have him on monitors, but I went to see him and his eyes were open and he squeezed my hand. He can’t talk because of tubes and things, but he’s improving. Briggs will go home tomorrow, and Jared’s wife said he’s resting and grumpy.”

“I suppose that’s the best we can hope for,” Clay said, breathing a sigh of relief as he continued petting Petey.

“Yes.” Sheriff Hunter hesitated. Clay figured he’d called for more than just to give him an update on his fellow deputies. He just had to give him a chance to say what he wanted to say. “With the department down three deputies for a while, we need…. You know Grange is on the loose, and apparently that isn’t enough for him. Judge Phillips received a call threating his safety about an hour ago.”

Clay groaned, realizing where he was going with this. “Sheriff… I….”

Sheriff Hunter sighed. “I know you and Judge Phillips don’t get along. The man could be a royal pain in the behind to Jesus Christ himself, but he needs protection. We know Grange has threatened Phillips in the past, and he’s done it again. Now he’s on the loose, and God knows where he is right now. We have everyone trying to find this asshole, but until we do, Judge Phillips needs to be kept safe.” 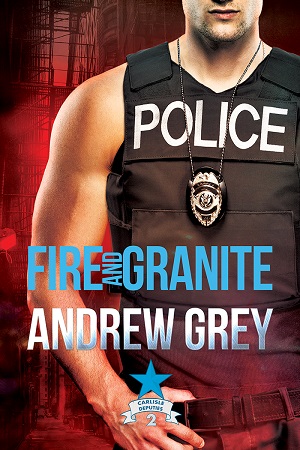 Blurb: The heat is growing from the inside, but danger is building on the outside.

Judge Andrew Phillips runs a tight ship in his courtroom. He’s tough, and when he hands down a sentence, he expects to be obeyed. So when a fugitive named Harper escapes and threatens his life, Andrew isn’t keen on twenty-four/seven protection… especially not from Deputy Clay Brown. They have a past, one that could cause problems in their careers.

But with Clay assigned to Andrew and the two of them together every minute, there’s nowhere to hide from their attraction—or from the fact that there’s much more than chemistry blooming between them. As the threat intensifies, Clay knows he’ll do anything it takes to protect the people who are taking their places in his heart: Andrew and his young niece and nephew.

Review: Each book in the Carlisle Deputies collection features a different romantic couple. To enjoy the overall story arc and crossover characters, I would recommend reading the series in sequential order.

Judge Phillips and Deputy Clay have always butted heads and never really got along. So much so that one would think that they would kill each other if stuck in a room together for more than an hour. Then Andrew is threatened by a man he sent to prison and who had escaped. So Clay was sent in to protect him. To top it off his sister tried to kill herself and now he was stuck with two little ones on top of hiding out.

Clay has always thought that the Judge was hot but a pain in the ass. Now they were going to be stuck together twenty-four-seven. His job was to protect but it looks like thing might go in a different direction, at least for them.

I have always loved these type of stories and this author seems to be the best one out there. Adventure, excitement, fascination, hot sexy times, danger and so much more is what you will find in this book. It caught my attention from the start and kept it all the way to the end. It gave me everything I could want in a book and so much more. The characters were a blast to read about and I enjoyed their story. I would have loved to hear what would happen to the kids in the end, but it still ended perfectly.

I would definitely recommend this story and I can’t wait to get my hands on the next book.