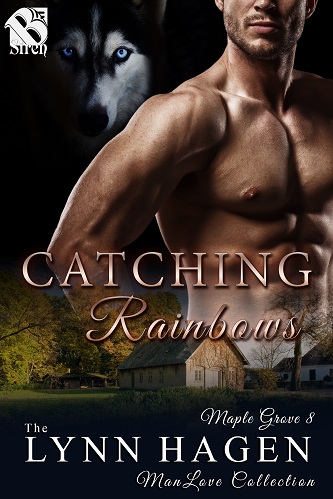 Blurb: Raven McCoy is in hiding from his pack. He has no desire to take over the mantle of leadership when his father steps down. But Robert McCoy isn’t taking no for an answer. His father sends his best man to track Raven down and bring him home. But Raven isn’t going anywhere. Not when he’s just found his mate, and not when Jet has trouble on his heels.

Jet Atherton leaves the dark realm once a month to visit his cousin. But on his last visit, something went terribly wrong. Jet is missing two weeks of his life, and he has no memory of what happened to him. All he knows is that he showed up at a mechanic shop, and the owner saved his life. There’s just one problem. Raven is his mate and Jet has to get away from him before the wolf shifter discovers that Jet is unseelie, the most hated fae in the preternatural world.

Review: Each book in the Maple Grove collection features a new romantic couple. To enjoy the overall story arc and crossover characters, I would recommend reading the series in sequential order. This series is branched off from many other series and I would suggest starting with book one in the Brac Pack collection.

Jet is fae but not just any kind of fae, but Unseelie. They are the darkest and most evil of the fae, however Jet is not like the rest of his family. There were many rules and one of them is they can never leave the realm. However he always goes to see his cousin who was in hiding once a month. So lets face it it was not his fault that he was caught and abducted.

Raven has found his mate. He had not expected the young man to show up to be his mate but then again he hadn’t known that he was not human either. When the young man fainted he took him to the one place where a human should go when injured but of course he runs with him as soon as he saw his cute ears.

He just has a few problems going on. Someone wanted his mate, his father wanted him to lead the pack and well just guess.

These stories have been going on for so long that they are starting to resemble each other in parts. The problem is that they are just getting rehashed in similar ways. However it is still quite entertaining and I do enjoy the humor that you can find in them. The characters are quirky and funny as hell in parts of it. There is danger mixed in the story to give you that little bite. I was glad to see some of the old characters from the beginning show up to give it a bit of a push.

Other than my own issues with the story it is still a good read.