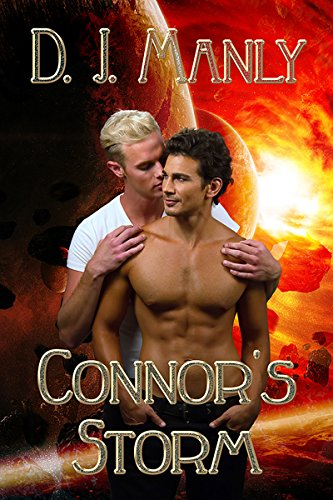 Blurb: Both men know the last thing they should do is become lovers, but the attraction between them is hot and instantaneous, and burning totally out of control.

Connor MacMahon, a colonel in the United World Defense, is sent on a top-secret mission to the planet of Sanctum. In his hands is the fate of the Earth.

Storm Varek, the leader of a clandestine resistance group doesn’t intend to watch as his people are slaughtered by their mortal enemy. Storm suspects that the United World Defense League doesn’t care about Sanctum’s inhabitants.

When Connor and Storm meet, there is no misunderstanding about where they stand. They don’t trust each other. The last thing they should do is become lovers but the heat between them is burning out of control.

Review: I did not get that these men were enemies. As soon as they meet they are attracted to one another and shortly begin to have sex. The UWD lied to Connor as his mission was only to protect the ATC and not the inhabitants of Sanctum. I was really glad he disobeyed orders when the Deino came for the inhabitants who were once apart of their community but escaped due to anyone found with the same sex was put to death.

Storm was fearless in his opposition to UWD and their deceit as as the Deino. I think I loved his character the most out of all of them. Fast paced with action, drama and a lot of sex.