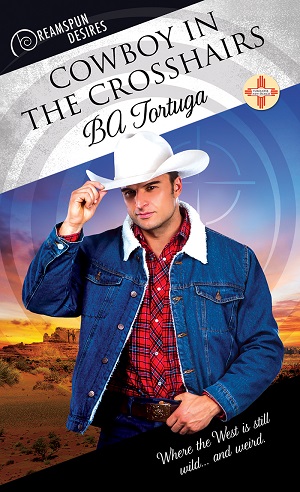 Well, really, TJ is a small-town police chief. Every Friday he holds court in the diner with the local holy roller, the art colonists, and the horsey people. But the Benes, who own the rodeo company, keep to themselves. TJ knows, because he was once hot and heavy with the oldest Bene son.
When Wacey Bene gets trampled by a remuda and comes home to heal, he’s none too happy to run into TJ, or his two little boys and their momma. The story might end there—if it wasn’t for some pesky bastard trying to kill Wacey.

The law steps in, and the townsfolk are cross about somebody messing with one of their own.
But once the bad guy is put away, can TJ and Wacey make their place in this wild and eccentric town a permanent one?

Review: I’m fast becoming a fan of BA Tortuga, particularly her cowboy/western novels. Because seriously, if it’s not a firefighter, cop, military man, then a story about a hot but flawed cowboy is just wonderful. Tortuga also usually does justice to a story with at least one cute kid as well (I think my favorite is still Two Cowboys and A Baby). So basically, if you like any of these things, you’ll at least enjoy the book, because despite my opinions I did enjoy the story overall.

Cowboy in the Crosshairs is the first book a new series called Turquoise, New Mexico. The story is about cowboy Wacey Bene. He’s been away from his family’s ranch on the rodeo circuit for ten years after having his heart broken when he was barely out of high school. The boy that broke his heart was TJ. He is now the police chief, but ten years before he was a confused young man who was scared of coming out of the closet and somewhere along the way in the past ten years also decided that he needed to marry a woman so he could have a family. TJ now has two cute little boys and an ex-wife he is good friends with, despite divorcing because he finally was able to come out of the closet to her. These guys need to get over past hurts, as well as TJ needing to help Wacey avoid being injured or killed by some mystery person.

I’ve got some really mixed feelings about this book. I liked the main plot points and as already stated, I enjoy Tortuga’s writing. The characters are good and for the most the story is well-paced.

My issue with this book comes down to the fact that I feel that the story was too glossy – as in it didn’t feel like there was a lot of detail in the main plot points. Furthermore, I also had an issue with how these guys treated each other with disdain at first, and to some extent some miscommunication. It was like they were still a couple of children. They were foolish young men ten years before and had a lot of growing up to do before they could truly be together. Also, it felt like the mystery of who was out to get Wacey was kind shoved in for a bit more drama. I suppose in this sense at least we know the guys do grow up in the end and get their HEA.

Regardless of my feelings of the plot, I do look forward to more stories in the series.