Hi guys, we have Leta Blake & Indra Vaughn with their new release Cowboy Seeks Husband, we have a great excerpt and a brilliant giveaway so check out the post and enter the giveaway! ❤ ~Pixie~ 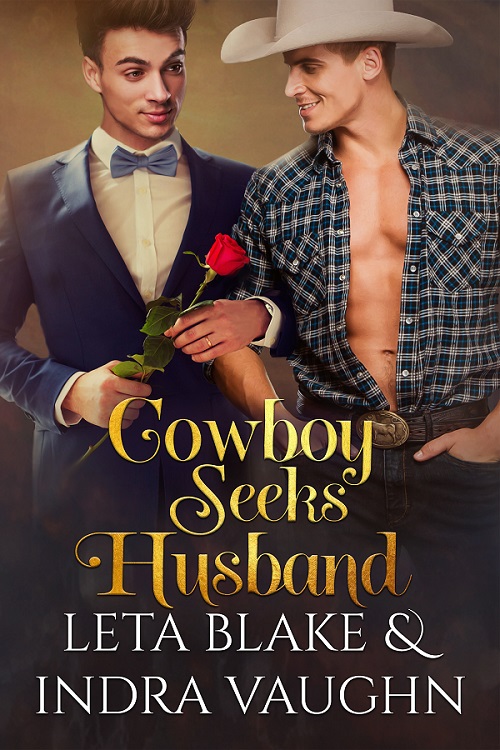 Walker Reed’s Louisiana cattle ranch is in debt after costly repairs from hurricane damage. To get the money, his family schemes to make Walker the star of a new bachelor reality series: Queer Seeks Spouse. How hard can it be to fake interest in a dozen handsome men for a few weeks in exchange for enough money to solve all of their problems?

Roan Carmichael never got his Masters degree after his mother was diagnosed with cancer. With medical bills piling up, and a costly experimental treatment available, Roan signs on to be a suitor on Queer Seeks Spouse. While he hates having to leave his sick mother long enough to win the cash for her treatment, he’s willing to do whatever it takes.

Can two men who are just in it for the money fake their way into real and lasting love?

“And I need these.” Roan held up the waterproof bib overalls.

Walker smirked. He had his arms folded over his chest and was leaning against the doorjamb of the kitchen. Roan had been cornered there by Walker and John while making sour apple tea. “Technically you don’t, but I’m sure you’ll want to wear them.”

Roan narrowed his eyes. “But that means we’re going into the water. I know what lives in your water down here. Alligators. And venomous snakes. I googled.”

“Now, why would you do that?” Walker dramatically slapped his forehead, then leaned in closer as if to share a secret. Roan leaned in too, drawn to Walker’s firm, muscled body and cheerful brown eyes, despite his probable imminent death on this so-called date. “Here’s the thing: gators aren’t that aggressive really. You probably won’t even see one. They want to stay as far away from you as you do from them.”

“No. But it makes it easier to get in the water if you tell yourself that.”

Roan stared at him.

“But, seriously, I’m not scared of the gators, and if there was a real, true danger, you know they wouldn’t let us anywhere near the water.”

Roan swallowed hard. The morning light from the kitchen window highlighted the little wrinkles at the edges of Walker’s eyes. Probably from squinting into fields all day. The man even smelled like fresh-cut grass and fresh air.

“As for the snakes, yeah…well.” Walker shrugged. “You just have to make sure you don’t wander into a nest of moccasins. I’m sure the set nurse has antivenom on hand.”

Roan put the waterproof overalls on the counter. “Oh my God, I’m going to die.”

Walker straightened, and the attractive, teasing grin fell from his face. “Seriously, though, if you don’t want to do it, just say so. I won’t hold it against you.”

“If you say bless your heart, I’ll know exactly what you mean,” Roan grumbled. Walker laughed, and God. He was so damn handsome. Feeling his face heat, Roan looked down at the dry bib overalls. They were pretty thick. Maybe the fabric would stop the snake bites. “Fine, I’ll come.”

Between the threat of biting critter, the thrill of Walker’s sweet drawl, and the headiness of his eager attention, Roan’s head was a swirl. Leaving his tea behind untasted, he stomped away for some privacy to get changed, ignoring John who said, “That’s got to be the most reluctant acceptance of a date I’ve ever seen. Andy’s going to love it.” After living in Michigan, USA for seven wonderful years, Indra Vaughn returned back to her Belgian roots. There she will continue to consume herbal tea, do yoga wherever the mat fits, and devour books while single parenting a little boy and working as a nurse. Win a Ebook of Vespertine!