Hi guys! We have Sean Ian O’Meidhir and Connal Braginsky popping in today with their new release Trial, we have a great excerpt, so check out the post and enjoy! ❤️ ~Pixie~ 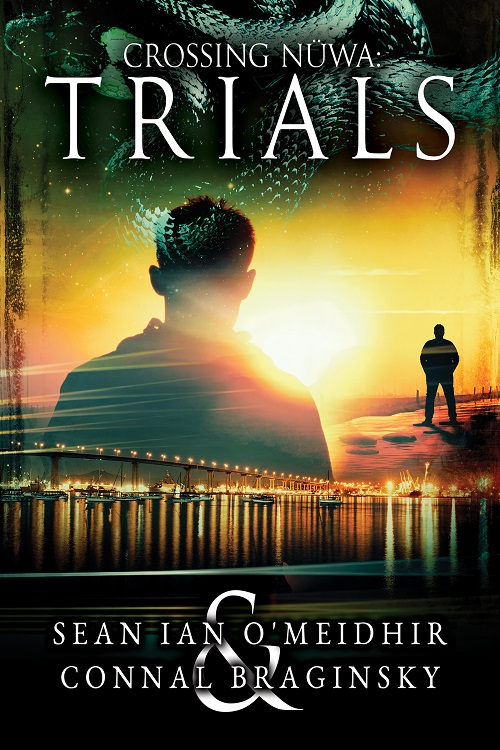 With the help of technomage and hacker Theo, rare snake shifter Robbie escaped his mother and clan, who planned to use him as breeding stock. While still working to break through the conditioning and mind control of his past, Robbie is enjoying exploring a new relationship with the worldlier Theo.

But their fight isn’t over yet.

A trip to his aunt’s house for Thanksgiving is highjacked by political intrigue, leaving the couple wondering who their friends really are. They cannot help but be drawn into larger plots while trying to find justice for Robbie at his mother’s trial. When clan rivalries turn deadly, they’ll need their allies—and each other—more than ever.

Guilt raced through me, a tangible thing that made me want to curl up and hide. She was so pale… her features drawn, normally vibrant hair lank against the pillow. “Her body’s naturally healing,”

Abi grumbled. “She’ll be fine if we can get blood for her to drink.”

“That won’t be a problem. Didn’t you say that the Council was able to call someone last night to help Robbie’s aunt?” Theo asked.

Why was this happening? Why would someone hurt Maggie? She was the kindest person in the world….Abi pulled her phone out, and Theo put his hand on her wrist. “Shouldn’t we maybe call the Council first?”

“Sugar, what are you saying?”

“If we call the Council, they’ll say to let them handle it. But they handled things last night and look where we are. We don’t know who did this, and if we don’t put a stop to it now, then we continue to be in danger. We don’t know if the Council will ever be able to figure out who did this. But we can. If we show up like they’re expecting us to.”

Abi chewed on her lip. “What about Mom?” she asked, her voice cracking, which tore at my heart.

“How’s this? Abs, you said that you know someone who can bring blood, yeah? Just call them and have them bring Maggie the blood. The three of us will go, as planned.”

Abi nodded. “Yeah. Yeah, okay.” She turned from us and focused on Maggie and her phone

“Theo….” He turned to me and I swallowed hard. “What’s Mother’s phone number?”

“Sugar…?” His tone spoke of concern, but I shook my head.

“Please?” He shifted his focus, his eyes fluttering closed for a brief second before he opened them and held out his phone to me. With trembling fingers I pushed the Call button and held the phone to my ear.

“Wilhelmina Ramsayi,” Mother answered. Her voice cut through me, leaving me breathless.

With a voice that sounded so much stronger than I felt, I asked, “Mother, are you still in San Diego?” I could have asked Theo to track her. There was a reason I hadn’t. It didn’t matter if she was here or not. She was needed now.

There was a pause that extended for a beat too long. I was about to check to see if I had lost connection when her very clipped response came. “Yes.”

“You’re needed at Scripps Mercy Hospital on Fifth Avenue. There’s been an assassination attempt on Maggie. Abi has called for blood to be delivered, and we need to make sure she will be tended to as the three of us go and find out who is behind this.” Connal Braginsky is a tech nerd that has taken a leap of faith and took a chance on writing. Born to Russian immigrants, he came out as gay at 19, and was recently diagnosed with Autism Spectrum Disorder (Asperger’s Syndrome).

He loves to read, and learn about Technology, Esoteric subjects and considers himself a transhumanist (the Russian Cosmism variety). His other pastimes revolve around philosophy which includes Panpsychism, Process Philosophy, Taoism, Buddhism and Gnosticism. He is also interested in various scientific fields, including Quantum Physics, Quantum Biology, Neurology, Psychology, and Sociology.