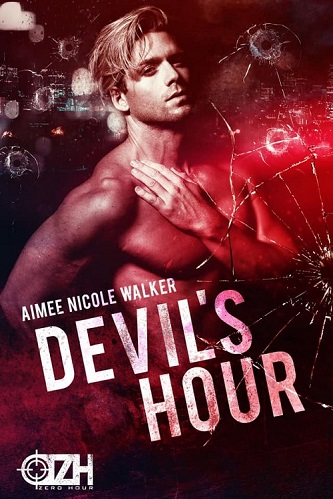 Blurb: Devil’s hour, noun: the hour when the demon or devil who leads hell is at its strongest.

Trigger warning: Part of the storyline involves coming to terms with a friend’s suicide, which may be difficult for some people to read.

Review: I did a happy dance when I heard the second book is being released, since I enjoyed the first so much.

It’s as good, nerve-wracking and scorching hot as the first one but the differences made it even more engaging story.

It’s from Royce’s POV and I was surprised at how much I loved it, since honestly, in the first book Royce came off as a bit of a jerk. Now however, we get to see just how much he loves Sawyer and what is it that makes him tick. It’s obvious how much Sawyer presence in his life changed him for the better, since he is calmer and more confident. It makes him better at his job and his relationship with Sawyer moves by leaps and bounds. It’s gorgeous story!

Unlike the first one, Devil’s hour has only one case they are working on, in addition to continuing investigation in Royce’s first partner. They build the case slowly as leads are scarce on the ground, and it ends up overlapping with Royce’s investigation into partner’s suicide. The ending is a bit cliffhanger-ish in that respect, I’m itching to know what will happen next!

But as for the current case and maybe more importantly, the relationship between two men it ends in a good spot. They are solid. They were solid through the book. We already knew Sawyer was crazy for Royce, now we realize Royce is returning his feelings. The pace is excellent and the story isn’t slacking on either romantic or suspense plot. The story culminates in heart stopping end.