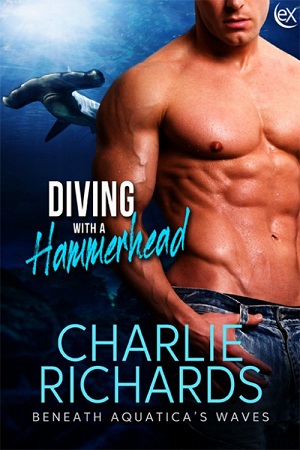 Title: Diving with a Hammerhead

Blurb: World of Aquatica: A single choice to do the right thing sends one ex-soldier’s life spiraling out of control.

Solomon Lynch figured his decision to help his boss’s son escape from under his dominating thumb would cost him his job. Instead, it nearly costs him his life. He’s jumped and beaten in an alley, but Solomon has no delusion about who sent the men. He only lives because his ropes weren’t tied tight enough, and he manages to escape the cinderblock that was meant to send him swimming with the fishes. He doesn’t remember much after that, but rousing in an unfamiliar place is a mixed blessing. Doctor Anthony Keller is hawt! Solomon realizes instantly that the doc returns his attraction, but his instincts tell him that Anthony is hiding something. Besides that, how can he drag the handsome man into his screwed up life, a life that could be cut short any minute by a vindictive rich guy?

Review: Each book in the Beneath Aquatica’s Waves collection features a new romantic couple. To enjoy the overall story arc and crossover characters, I would recommend reading the series in sequential order.

Solomon lost his family at the age of eighteen, joined the military for a few years and then went to work as a guard for a very rich asshat. He was definitely not happy there so when the asshat’s son wanted to run, he let him. It got him fired and almost killed, only to be saved by one hell of a sexy man. A sexy man that claimed to be a shape shifting hammerhead shark.

Anthony was just swimming along when he smelled blood. As a shark you can imagine what he was thinking, only to find out that the man was his mate. A mate that someone had tried to kill.

Once again Charlie has not disappointed me. This story caught my attention and kept it there all the way to the end. I can guarantee that this is one of those stories that will be read more than once. So much so that I am going to go back and read the whole series again. This book gave me everything from danger, excitement, suspense and some hot sexy times.

I had a blast reading this and can not wait to get my hands on the next book. I would definitely recommend this book and the rest of the series.