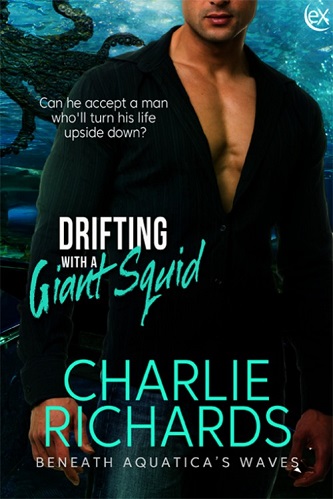 Title: Drifting With a Giant Squid

Blurb: World of Aquatica: When a police captain uses a free pass to explore a marine park, he runs across a man whose blatant pursuit turns his life upside down.

Captain John Casinov has two loves in his life—his family and his work. When his son, Jonathan, and the man’s family visits from Santa Cruz—primarily to try to convince him to retire and move south—John takes advantage of one of his detective’s offer. He accepts a bunch of free passes to the marine park, World of Aquatica. While there, he finds his interest snagged by a big, friendly, black-haired man. The handsome man brazenly introduces himself as William Roush…then he asks John on a date. While he’s flattered, John laughs it off while declining. Undeterred, William approaches John a second time later that day, so he accepts. Imagine his surprise when John discovers who William actually is—the partial owner of the marine park. John doesn’t understand why a man who’s young, confident, and rich—who could have anyone he wants—would pursue him. When William shares that shifters are real, John wonders at the man’s sanity…until William actually proves it. Can John come to grips with his newfound knowledge and accept William into his life? Or will retiring and running be the decision of the day?

Review: Each Book in the Beneath Aquatica’s Waves collection features a new romantic couple. To enjoy the overall story arc and crossover characters I would recommend reading them in sequential order.

John was the captain of the police force and he loved what he did. However his son wanted him to retire and move south to be near them. He just wanted to do what he loved. When a night out with the family leads him to one hell of a sexy man, secrets start to come out. As well as the problems or at least problems for his son. Then he finds out William has a pretty big secret of his own and damn if it is not surprising for John.

There were a few issues with this story that made me drop the rating down a bit. For one it doesn’t flow as well as it should and it ended so abruptly. There could have been so much more added on to make it stand out which it did not do this time around. Also the police captain just didn’t seem to connect as well with his mate, which made it hard for me to connect with him. I do love how this author gives us some pretty unique characters to read about and makes their world stand out. Other than my issues it was still a good read.

I had a blast reading this and can’t wait to get my hands on the next story. I can guarantee that this is one of those stories that will be read many times over. I would definitely recommend this book.