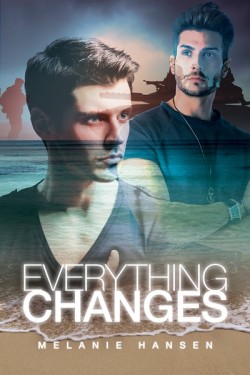 Former Marine and lower-leg amputee Carey Everett keeps a gruelling schedule of counselling fellow war veterans and their families. The injury he received in Afghanistan forces him to rely on a reserve of strength he didn’t even know he had. A much deserved vacation will let him reconnect with his best friend, who saved his life and has been there for him through devastating injury and painful recovery.

Part-time EMT and aspiring singer Jase DeSantis has been in love with Carey for years, but he’s come to accept that his straight friend will never be able to offer more. Jase fills his days with band rehearsals, ambulance shifts, and willing groupies, all while trying to cope with debilitating PTSD.

A week of sun, fun, and music in San Diego changes Jase and Carey’s lives forever when their relationship takes an unexpected turn. Jase has been longing for that change, but it leaves Carey reeling with confusion. As Jase fights to hold things together, Carey deals with doubts, fears, and his own preconceived notions about labels and the true nature of love.

Review: This is one emotionally charged read and I loved it! Everything Changes is Melanie Hansen’s debut novel and I have to say for me it hit all the right buttons. I’m a sucker when it comes to the wounded soldier kind of angle and really enjoy the emotional rush that must inevitably follow provided that the author hits on those emotions.

This is about best friends, ex-Naval medic Jase DeSantis who out in the real world works as an EMT and working hard to get his band signed up to a record deal. Carey is an ex-Marine, an explosion in Afghanistan meant that he had lost the lower half of one of his legs and he now works with other ex-service people who have trouble coping with their own injuries. The guys met in service and became friends on board a ship some years earlier and through Carey’s rehab they continued being friends.

I enjoyed the brief flashbacks because, honestly, nothing bores me more than a long flashback telling us how we got to where we are in the middle of a book. These flashbacks helped to serve to explain the friendship and comradely between the guys, they also serve to define Jase and Carey’s individual issues. For example, Jase also has PTSD that Carey helps him to deal with during the course of the book. Okay, one thing that niggled at me, why did it take Carey so long to see Jase’s PTSD? I suppose there are many reasons to potentially explain this one.

So that’s the guys – now the attraction. I loved it, it was slow simmering. Jase is openly bisexual. Carey, I think, is just confused about their attraction and his sexuality, something that I concluded after a couple of flashbacks. That being said there is a bit of the “gay for my best friend” or “gay for you only” vibe, but really it is only a side note and not really what the book is about. Together, Jase and Carey work well and it’s easy to quickly cheer for these guys to get along.