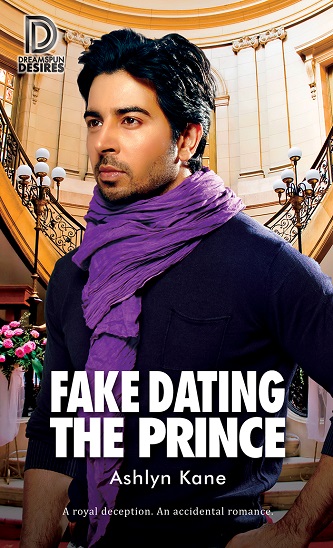 When fast-living flight attendant Brayden Wood agrees to accompany a first-class passenger to a swanky charity ball, he discovers his date—“Call me Flip”—is actually His Royal Highness Prince Antoine-Philipe. And he wants Brayden to pretend to be his boyfriend.

Being Europe’s only prince of Indian descent—and its only openly gay one—has led Flip to select “appropriate” men first and worry about attraction later. Still, flirty, irreverent Brayden captivates him right away, and Flip needs a date to survive the ball without being match-made.

Before Flip can pursue Brayden in earnest, the paparazzi forces his hand, and the charade is extended for the remainder of Brayden’s vacation.

Posh, gorgeous, thoughtful Prince Flip is way out of Brayden’s league. If Brayden survives three weeks of platonically sharing a bed with him during the romantic holiday season, going home afterward might break his heart….

Review: Fake Dating the Prince is a standalone novel by Ashlynn Kane for Dreamspun Desires. As usual I always look forward to the released from the Dreamspun Desires line. They are sweet, sexy and just oozing with romance.

I have to admit that although I’ve read books by Ashlynn Kane before, I can’t actually name one from the top of my head but nothing stands out in my memory that I have disliked Kane’s writing in the past. Which, as it turns out, must be true. I really enjoyed this story from start to finish. It had all the sweetness and romance that I expected from a fairy tale romance. I really enjoyed Kane’s writing overall, I found myself quickly invested in the emotions of the two MCs and I was engrossed until the end.

The story starts with adventurous flight attendant, Brayden Wood. He wants to make the most of life and is lucky enough to use his job to be able to do so, going to many different locales between long haul flights. Instead of going on a cruise with his family for Christmas, which is something that he doesn’t want to do, he has plans to go to an obscure European principality for three weeks to relax on his own.

However, things change when one of his first-class passengers, who has openly flirted with him on numerous occasions invites Brayden to a very posh charity ball, offering to pay all expenses. That passenger says to call him Flip, when in fact he is really the Prince Antoine-Phillipe. One thing leads to another and Brayden’s very own royal romance begins to play out. It is seriously sweet; Flip is a wonderful character in that while he can be high handed he always wants the best for Brayden. Also, I loved the chemistry between the men, they wonderfully complement each other.

This is a wonderful, fairy tale like story. There are enough stereotypes to make you think of a Hallmark movie or that Netflix move A Prince for Christmas – an adventurous flight attendant is swept off his feet by a European Prince. With his father being a Bollywood star back in the day, it all feels very Grace Kelly. And being that my own mother is obsessed with Bollywood, I found myself thinking of a movie with Shahrukh Kahn in it. Very cute, very sweet and absolutely perfect.