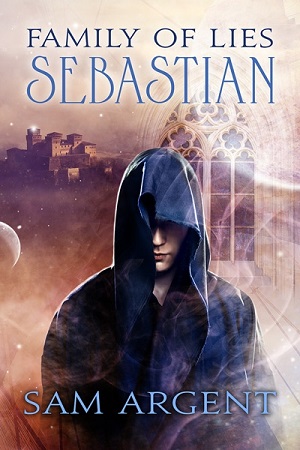 Blurb: Sebastian Orwell did the only thing a smart wizard could do when he stumbled upon the wounded Crown Prince: he healed him and dumped him in a tavern where he could continue not being Sebastian’s problem. Unfortunately, the prince isn’t content with being alive, and he hunts Sebastian down to thank him personally. Not only is Sebastian stuck with the prince’s unwanted affections, he’s also confronted by growing evidence linking the assassination attempt to someone from his father’s past.

Lord Orwell is a lot of things: thief, liar, drunk, and all around horrible father, but Sebastian knows he’s no murderer. In order to prove it, Sebastian has to keep the prince alive long enough to discover the truth—a task made considerably harder because the idiot prince prefers wooing Sebastian over securing his own survival. On top of everything, Sebastian needs to save the day without revealing his magical powers and the real reason he hides his appearance.

Sebastian had no intention of playing the hero, but whoever is stirring up shit in his country will pay for destroying his quiet life.

Review: Sebastian keeps to himself and does not like being around others. His humor is funny to me. I found his snarkiness lovable. Prince Turrin has a way of trouble finding him in the form of assassination attempts on his life. This is how the two meet when Sebastian saves him.

The prince wants to get to know Sebastian better despite his standoffish vibes. He’s persistent an eventually wears Sebastian down. The two are hot together once they actually get together.

The mystery off the assassination attempts and who is behind and to what degree was fascinating and intriguing. I loved how the story flowed and ultimately ended up. Well written with degrees of romance, suspense, action, drama and hot sex all culminated in a story that had me on the edge of my seat.