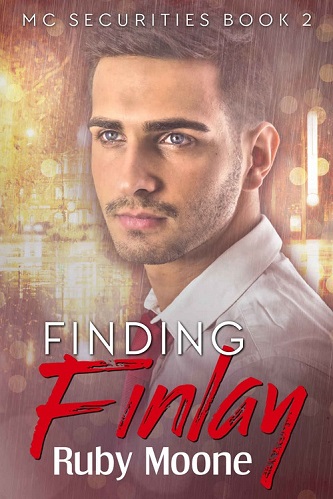 Blurb: Aaron Baker has a problem. His online clothing company is under attack. Whilst MC Securities tackle the breaches in security, he asks for an agent to pose as his fake boyfriend. He doesn’t bargain for getting a snarky, ex-marine with sad, blue eyes and submissive tendencies.

Dumped by his boyfriend, Finlay Masters concludes that the best, and safest, place for him is to return to the closet. Kicked out by his parents as a kid for being gay, closeted in the army for fifteen years, body wrecked by an explosion that cost him his job, he isn’t the best bet for any kind of relationship. Even a fake one.

As the investigation mounts, Aaron wants more, but Finn has no faith in love, never dared need anyone. Aaron talks of how lucky he is to find him, but Finn knows if he is to have a chance at a relationship at all, he needs to find himself.

Review: Aaron hires a cyber security guy, Finlay, to help against the attack on his online business. Finlay for his part has issues of his own but is determined to stop the attack. While trying to flush out the culprit the two grow closer and sparks begin to fly.

I loved that both men had their own issues and were not perfect. The easy way they talked was a bonus instead of the normal angst or tension between MC’s in most books. I liked the way the story progressed.

The mystery and suspense added an extra layer of surprise to the book.