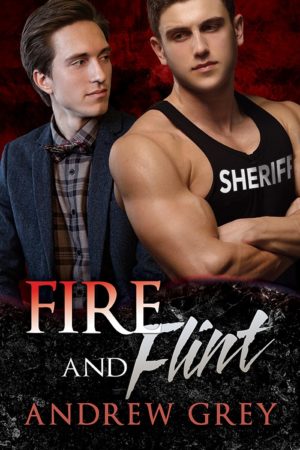 Blurb: Jordan Erichsohn suspects something is rotten about his boss, Judge Crawford. Unfortunately he has nowhere to turn and doubts anyone will believe his claims—least of all the handsome deputy, Pierre Ravelle, who has been assigned to protect the judge, as he’s been receiving the threatening letters. The judge has a long reach, and if he finds out Jordan’s turned on him, he might impede Jordan adopting his son, Jeremiah.

When Jordan can no longer stay silent, he gathers his courage and tells Pierre what he knows. To his surprise and relief, Pierre believes him, and Jordan finds an ally… and maybe more. Pierre vows to do what it takes to protect Jordan and Jeremiah and see justice done. He’s willing to fight for the man he’s growing to love and the family he’s starting to think of as his own. But Crawford is a powerful and dangerous enemy, and he’s not above ripping apart everything Jordan and Pierre are trying to build in order to save himself….

Review: This series is a branch off from the Carlisle Cops series. So I would suggest reading those first, although it is not truly needed.

I will admit that the moment I saw that this was a branch off from Carlisle Cops, I knew that I had to get my hands on it. It is not only entertaining but it starts off with excitement. Judge Crawford has pissed someone off and now is in need of protection. So when Pierre takes the case, his first instincts are usually right. The Judge is getting threatening letters and Pierre is set to find out just who it might be. Although in his eyes this was going to be boring as hell. That is until he gets a sight of the Judge’s assistant, Jordan.

Jordan is a sexy young man who has had an amazing life. He had survived cancer, so when he saw Jeremiah, he knew he just wanted to be his dad. Jeremiah had been abandoned and had been dealing with cancer. Eight months in, he knows he will do anything for this little boy. When the Judge starts getting threatening letters, Jordan is set to help the deputy. That is until he finds something that might stop his world altogether. It would seem the Judge has some nasty secrets he has been keeping.

I have always read romances with a bit of suspense in them and never really gave any other type of book a look at. So when I started reading Andrew’s books, well lets just say it made a big impact in what I read these days. Friendships that strengthen and turn into love, plot twists, quite a bit of suspense, trouble along the way and some hot loving is just a bit of what you get with this story.

The way the mystery was written in was pretty direct and thought out. The story just seemed to flow perfectly and the romance was hot. The characters were a big hit with me and it was like you knew them from the beginning. My only issue was I wanted to see what would happen to the Judge, but guess the might have to wait till the next book. It is a very fascinating story that kept my attention from the start and kept me on the edge of my seat till the very end.

I had a lot of fun reading it and can not wait to get my hands on the next book.