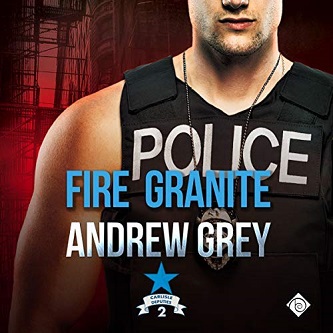 Blurb: The heat is growing from the inside, but danger is building on the outside.

Judge Andrew Phillips runs a tight ship in his courtroom. He’s tough, and when he hands down a sentence, he expects to be obeyed. So when a fugitive named Harper escapes and threatens his life, Andrew isn’t keen on 24/seven protection…especially not from Deputy Clay Brown. They have a past, one that could cause problems in their careers.

But with Clay assigned to Andrew and the two of them together every minute, there’s nowhere to hide from their attraction – or from the fact that there’s much more than chemistry blooming between them. As the threat intensifies, Clay knows he’ll do anything it takes to protect the peo-ple who are taking their places in his heart: Andrew and his young niece and nephew.

Review: Fire and Granite is the second book in Andrew Grey’s Carlisle Deputies series, which is a spin off of his Carlisle Cops series and has the same naming convention in that each book from both series is called “Fire and…”. I really enjoyed Carlisle Cops series. I’ve only read all of Carlisle Cops books and have heard the audio narration for half of the series. I’ve also read the first book of this series but again, have not heard the audio. Fire and Granite does work as a standalone book, although I do remember back to other books when we meet up with the various people on the Carlisle police force. To be perfectly honest, I don’t really remember the first book of this series all that well, but I remembered the names when I came across the characters in this book.

Granite and Fire is the story of Deputy Clay Brown and Judge Andrew Phillips. The two do not get along well at all, although Clay has no idea why the judge is a bit of a dick to him. Especially since they encounter each other in the courtroom when Clay needs to give testimony it can make for slightly awkward times and it makes a certain deputy very grumpy, but it’s a sexy kind of grumpy so I’m all good with that. They are thrown together when a prisoner transport goes wrong and sees two deputies in hospital and Clay uninjured when his no-good cousin (no love lost between the two men) is broken free and the deranged man goes after the judge he swore revenge on the last time he was in a court room. Now Clay is keeping guard on Andrew and the two men have no choice but to sort out their differences. However, in a pleasant turn of events their differences aren’t really differences at all. But the stakes are ramped up when Andrew, in the middle of being threatened by a criminal, needs to go out of state and then make a home for his niece and nephew as his sister struggles with mental illness. Clay is by his side every step of the way and the two men are quickly coming to realise just what that means to them and their hearts and their futures.

Narration for this book was by Greg Tremblay. I’ve heard Tremblay’s narration a number of times in the past, including a few other Andrew Grey books. I find Tremblay’s tone and timbre well suited to the characters that Grey writes and all in all, I have no complaints. I was really happy with how well paced the narration was and the voices and emotions given to the characters, particularly the kids. Grey tends to write kids into a lot of his books and sometimes narrators miss the mark with the little ones, but Tremblay was on point in my opinion.

This is perfect for those that love to read or listen to cops falling in love as they try to solve the crime, get the man they want to put in gaol and get the man that they want in their life and their bed.