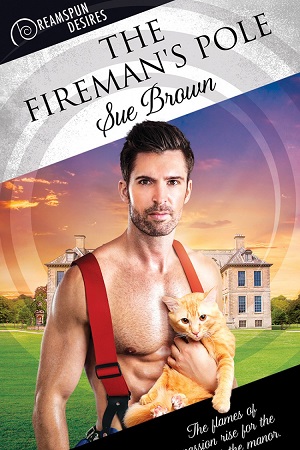 Blurb: The flames of passion rise for the lord of the manor.
It’s springtime in Calminster village, but things are already heating up. Sexy firefighter Dale Maloney is new to the local station. When Dale backs the company fire engine into the village maypole, he attracts the ire—and attention—of Benedict Raleigh, the Baron Calminster.
Soon after meeting Dale, Ben breaks off his relationship with his girlfriend, and the sparks between Ben and Dale are quickly fanned into flames.

Unfortunately the passion between the two men isn’t the only blaze in the village. An arsonist’s crimes are escalating, and it’s up to Dale and his crew to stop them. Meanwhile, as they investigate, an unscrupulous business partner attempts to coerce Ben into marrying his daughter. The May Day parade is around the corner, but they have plenty of fires to put out before Ben can finally slide down the fireman’s pole.

Review: I have a soft spot for books set in England – I think it stems from my love of regency MF romances and it kind of just holds over to everything else. I don’t know why, I’m just weird. That was what initially attracted me to Sue Brown’s books and after that I just fell in love with her writing and the sweetness of her stories. For me Sue Brown is definitely a go to if I see a new book come out.

Fire fighter Dale Maloney is the newbie at the village of Calminster’s fire station and he is having problems making a good impression. Life just doesn’t seem to like him at the moment because he seems to be doing everything wrong, especially when it comes to the Baron of Calminster, Benedict Raleigh.

For the most part, what you read in the blurb is what you get in the book.
Dale is indeed the hot firefighter who is trying to fit into small town life and is making a few mistakes along the way. He also comes with baggage. He’s moved for a fresh start. He’s decided to take charge in his life. He no longer wants to live in the closet and he doesn’t want to be someone’s dirty secret. Despite his bumpy start with the Baron of Calminster, Ben, the two men actually do hit it off. So much so, that Ben knows that if he wants anything to be real in any sort of relationship with Dale, he has to make some major changes in his life.

This is a sweet story that feels real. The emotions feel on point and the chemistry between the characters is explosive. I also like the fun of playing off the whole “lord of the manner with one of the commoners” type of story (I think this again goes back to my initial love of regency romances).