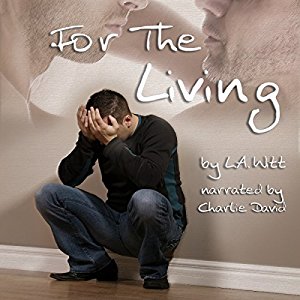 Title: For the Living

Review: Not going to lie, this was a difficult book for me to get through. It wasn’t so much the story, I enjoyed the story and have enjoyed similar story lines immensely in the past. It is most like a combination of factors, which I will explain. I will try not to be too negative in my review because there was definitely a number of elements that I did enjoyed and allowed me to finish the book instead of just quitting.

For me L.A Witt is not on my go to author list, in fact her books are very much hit or miss and half the time if it’s a miss I can’t pinpoint exactly why. Unfortunately, For the living is one of those books.

What you read in the blurb is what you get in the book, so no big surprises there. One of the problems I had with this book was probably the amount of angst – I’m not a massive fan of angsty books – and another problem is that the story was a tad slow. I think normally I would have been ok with slow for the past part but combined with mid-level angst I was sorely tempted to skip parts (in fact, I will admit, I skipped the end of some chapters to move along a bit).

However, despite that, the story itself is more than pleasing for me. I liked reading about the sweet romance between Jay Warren and Scott Lawson. Jay has been battling his inner demons where his sexuality is concerned for some time now. When he had finally gathered the courage to tell his wife, he loses her. That is the tragedy at the center of this story and the grief and guilt is almost crippling. Scott is a funeral director, working in the family business. He meets and befriends Jay, but before anything can happen Jay has A LOT of baggage to work through.

In a lot of ways, the story is predictable and yet I don’t consider it a bad thing, it makes the difficult story line and feelings a lot easier to enjoy. Additionally, despite Jay being an (understandably) angsty arsehole at times, it was so easy to relate to him and Scott. In fact, Scott was such a sweetie and fell in love with him.

A quick note on the narration, it was, to put a fine point on it, wonderful. This was the first audio book I’ve heard narrated by Charlie David and I really enjoyed the different tones he was able to add to the book. I have to admit, if I had been reading this book it could have very potentially been a DNF. I’ve never heard any of Charlie David’s work before but he is certainly a narrator I wouldn’t mind hearing again.