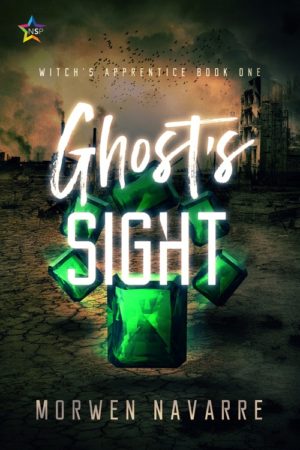 Blurb: Years ago, a bond was forged when a little boy, plagued by dreams and visions he could not explain, became the Witch’s new apprentice healer.

Gerry, a rugged and headstrong hunter, is brought to the Witch for healing, and Ghost is forced to reveal the mark beneath his snowy hair that sets him apart from other men.

But Gerry does not reject Ghost as an outcast. He finds Ghost beguiling and mysterious and declares his intent to claim Ghost as his own. When Ghost is kidnapped by a rogue ranger, Gerry will need to hunt a lethal and unpredictable prey, and Ghost will need to use all his skill to survive until Gerry can find him..

Review: There is a lot going on in this story. Ghost is a witch’s apprentice and learning everything he can. Gerry is a hunter. He ends up hurt and in Ghost’s care. The two hit it off. But danger lurks close by and the two end up squaring off against the one who kidnaps Gerry to get to Ghost.

I liked the story but felt at times there was too much going on and not enough explanations for other things. The story is cut off abruptly after the final scene finishes. I assume the next book will pick up where this one leaves off.

Interesting read with plenty of characters interwoven throughout as well plenty of interaction between the characters.