Hi peeps! We have M.D. Grimm visiting today with the tour for her new release Healing Lance, we have a great exclusive excerpt and a brilliant $10 Amazon GC giveaway so check out the post and enter the giveaway! ❤️ ~Pixie~ 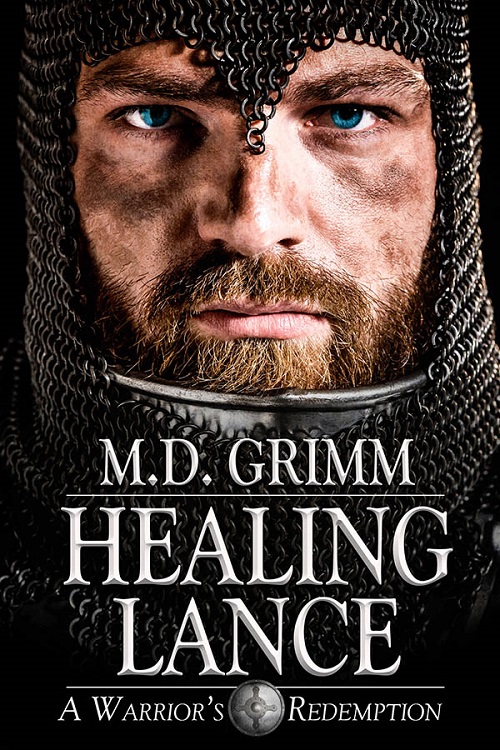 Lance is known as Scourge, the warrior in the black armor, the dog of the warlord Ulfr Blackwolf. He was just a boy when Ulfr found him and molded him into the perfect weapon. He slaughters and pillages on command, merciless and numb, devoid of emotions. Then a baby girl laughs at him during a raid.

When Gust, a talented healer, is out deer hunting and stumbles across a magnificent horse bearing a mortally wounded rider, he has no idea that his life is about to change forever. Gust applies all his skills to his patient, determined to save the rider’s life, and is rewarded when the man opens his eyes.

As friendship, and more, bloom between warrior and healer, so does the danger over the horizon. Ulfr has not forgotten, and Lance must take his first steps on the long road to redemption.

Warnings: References of past abuse Good day lovely readers! Thank you for joining me. I am M.D. Grimm and I am here to promote my newest release, “Healing Lance.” This is the first book in the “A Warrior’s Redemption” trilogy. This is a bit of a “pet project” that I am overjoyed to finally reveal to the world. The next two books, “Forgiving Lance” and “Avenging Lance” will be released in August and September, respectively.

I wanted to share an exclusive excerpt to pique your interest. (Chapter One can be found on my blog.) Enjoy!

Blood and death. He always dreamed about blood and death—screams and pleas, the whistles of blades through the air, and the clanging of steel. The crackling fires and the smell of smoke and burning flesh. It was all he ever dreamed about when he did dream.

Lance flinched and rose up out of the visions of death into quiet. He frowned, acknowledging the aches and throbs of his wounds. His face and groin felt the worst, and a few stabbing pains to his ribs were a constant reminder of the gauntlet. He had a headache. He took a deep breath of clean, stale air and took stock of his situation. He wasn’t on Brutus anymore. He was still, lying on softness, too much softness. He opened his eyes, blinking against the darkness, and stared at the thatched roof.

The sound of heavy breathing nearby had him slowly turning his head. A young man sat slouched in a chair, arms crossed, bare feet resting on the bed. His eyes were closed, apparently asleep. Lance watched him curiously. His skin was dark so that meant Brutus had probably taken him south. His companion’s black hair was twisted into dozens of thin braids, all pulled back in a tail behind his head. His tight shirt and breeches showed off modestly muscled arms and legs. He was slim of figure, and the gray jerkin lying on the corner of the bed eased Lance’s tension. His companion was a healer. That was all right, then. Healers were sworn to save lives, not take them.

As Lance’s eyes grew more accustomed to the darkness, he noticed a large window, currently closed with thick shutters. It was a simple room, a healing room.

Lance looked at the young man again and shifted his leg, despite the soreness, to nudge the healer’s foot. He had to do it a couple of times before the man jerked awake and looked around blurrily. He yawned and stretched.

“Pardon me,” Lance said, voice raspy. He spoke in Taris.

The healer jolted at the sound of his voice and swung around, eyes wide, trying to see him in the dark.

“You’re awake!” Thankfully, the healer knew the language as well.

The man scrambled over to a table and quickly lit several candles. He returned and held one close to Lance’s face. Lance flinched and squinted away from the light.

“Sorry.” The man instantly moved the flame away. “I wondered if you’d ever wake up. It’s been four days since we brought you here.”

Lance shifted his gaze back to the healer. He had a pleasant voice, gentle and joyfully enthusiastic. It was a nice difference from the cruelty and coldness of Ulfr’s voice and those of his warriors. And, wow, those were pretty green eyes.

No one outside his merry band of slaughterers knew his real name. Everyone in the empire knew him as Scourge.

“Gustum. But please call me Gust. Your horse has been trotting past your window every day, snorting in impatience. Glad I can finally tell him you’re awake.”

Lance warmed to know that Brutus was well. “Brutus. His name is Brutus.”

Gust set the candle on the bedside table and then helped Lance into a sitting position. Lance grunted at the strain to his muscles and spikes of pain at random points of his body.

Gust handed him a goblet full of water. “Drink that. I’ll be right back.”

He went to the window and pulled back the shutters. The moon was full and high in the clear night, giving adequate light. It was warm with a gentle wind, carrying pleasing scents. Lance took a deep breath and bit back a wince when his chest throbbed with pain. Gust yanked on his sandals and grabbed the jerkin before rushing out of the room. Lance sipped the water, swishing it around in his dry mouth before swallowing.

When Brutus’s heavy steps reached his ears, Lance’s grin stretched painfully across his face. He shuffled out of bed and struggled to stand, ignoring the pain, as Gust hurried inside.

“Hey, easy! I didn’t say you could—Damn it.” Gust immediately grabbed Lance’s arm when he wobbled and pulled it over his shoulders. They shuffled to the window as Brutus poked his head inside, whinnying and bouncing in glee.

“My friend,” Lance whispered and pressed his face against Brutus’s nose, nuzzling him, and stroking his neck. He acutely felt Gust’s hands on his waist and vaguely noted he was still naked. Gust had warm and surprisingly strong hands, with a couple of calluses, and they felt nice pressed against his skin. He took comfort from Brutus and Gust’s steady presence, momentarily forgetting his wounds.

His eyes popped open. Oh yes, he was alive, and Ulfr would be hunting him. He should leave immediately. Staying in one place was foolish, and he didn’t want Gust to be slaughtered. He was kind to him and kindness shouldn’t be rewarded with bloodshed. Ulfr would delight in torturing and killing a healer, especially one that kept his rebellious weapon alive.

The next two books in the trilogy, “Forgiving Lance” and “Avenging Lance” are available for preorder at Amazon and Smashwords. I also have a newsletter that I try to send out monthly with all the goodies you can expect in the future. If you’re a fan of my book “Leopold” (Saga of the Bold People 1) then you might be excited to learn that the sequel, “Legacy” will be out in October 2020. More information can be found at my website.

I also plan on republishing my entire Shifter Chronicles, On Wings Saga, and Eye of the Beholder in 2021, with updated and expanded text for most of them. Keep your eyes peeled for those!

I hope you stay safe and healthy, and may dragons guard your dreams, M.D. Grimm has wanted to write stories since second grade (kind of young to make life decisions, but whatever) and nothing has changed since then (well, plenty of things actually, but not that!). Thankfully, she has indulgent parents who let her dream, but also made sure she understood she’d need a steady job to pay the bills (they never let her forget it!).

After graduating from the University of Oregon and majoring in English, (let’s be honest: useless degree, what else was she going to do with it?) she started on her writing career and couldn’t be happier.

Working by day and writing by night (or any spare time she can carve out), she enjoys embarking on romantic quests and daring adventures (living vicariously, you could say) and creating characters that always triumph against the villain, (or else what’s the point?) finding their soul mate in the process.