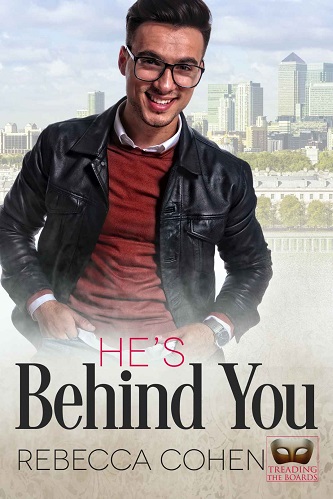 Title: He’s Behind You

Blurb: ICraig Rosen thinks he’s pretty happy with his quiet geeky life working in a lab in London and playing Warhammer. But one of his colleagues has other ideas and drags Craig along to an audition at the amateur dramatic society, the Sarky Players, for their Christmas pantomime, Aladdin. Meeting Jason Carter makes Craig think that maybe he’s not as content as he thought.

Jason accepted he’s gay a little later in life than most, but now with an ex-wife and in his late thirties, he’s ready to embrace who he really is. He can’t believe his luck when he meets Craig, and the cute younger man’s patience and gentleness make him the perfect guy to help Jason navigate his new life.

While there’s no denying the attraction between them, it’s not just Jason’s insecurities that might upset their best performance. Craig is convinced that someone as confident as Jason, a corporate lawyer who looks sexy in a suit, could never settle for a man like him. Together they will need to re-write the script to give themselves the happy ending they deserve.

Review: Rebecca Cohen’s series, Treading the Boards, is as fun as the pantomime and plays that amateur theatre group the Sarky Players thrive on so much. While these books may be read as standalones, I do like that we do get to catch up with the previous characters so it would be good to read the previous installments.

In He’s Behind You we get the story of Craig Rosen and Jason Carter. Craig is a post-doctoral research at medical research labs somewhere in London. He’s a quirky guy, who has known who he is for a long time; including the fact that he loves the role playing game, Warhammer. Jason is a corporate lawyer who got married at the age of seventeen after getting his girlfriend pregnant. Now at the ripe old age of thirty-eight he is finally divorced and has made the step to come out of the closet. One aspect of Jason that I love is that he is still great friends with his ex-wife and his two kids are fantastic. These three make really good minor characters. But I am sidetracked, after a chance meeting Jason and Craig meet while auditioning for the Sarky Players.

For me it was way too easy to relate to Craig. Partly because I know people that are similar to him in personality and this also includes me, but mostly because this portrays academia and scientific research and generally life working in a lab with great accuracy. I should know: I’ve done the whole PhD thing and work in a lab. Craig and Jason work really well together, I loved and believed their chemistry.