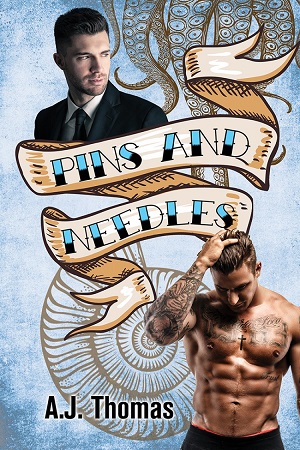 Blurb: The truth is rarely seen on the surface, and getting to it might mean digging deep….

After a devastating accident and a long stay in the hospital, the last thing petroleum engineer Sean Wilkinson wants to deal with is the settlement the oil company tries to force on him. He’ll never be able to work in his field again, his education is all but useless, and his surgeons are pessimistic about whether he’ll ever walk again. He needs someone in his corner, but most lawyers take one look at his tattoo-covered father and turn their backs. It’s just Sean’s luck that the one attorney willing to give him a chance is also the hottest guy he’s ever seen.

As a trial lawyer, Nate Delany has a lot to prove—to his father, the world, and himself. Sean intrigues Nate, and he struggles to reconcile the gifted tattoo artist he can’t stop fantasizing about with the quiet, brilliant engineer. His investigation reveals facts left out of the accident report—including an illicit affair, greedy coworkers, and a vicious corporation that will do anything to protect its bottom line. When Sean’s life is threatened, winning Sean’s case, and his heart, becomes a lot more dangerous.

Review: An intriguing read about Sean and how he copes after an accident leaves him in a wheel chair battling the company he worked for over a settlement. In steps Nate Delaney to negotiate the terms of the settlement.

These two men are not without their struggles in life but they grow closer amid a wide variety of suspicious things going on around them. I found both characters to be interesting. I liked the way they interacted with each other and others.

This story will draw you in and not let go until the very end. I enjoyed this story and it’s characters. Well written with the right amount of mystery and romance.