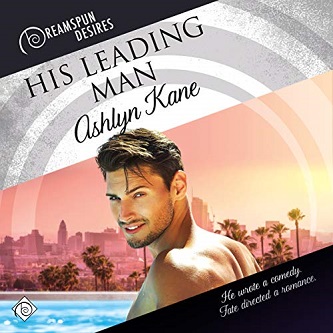 Blurb: Drew Beaumont is bored of the same old roles: action hero, supervillain, romantic lead. He’s not going to let a fresh gay buddy comedy languish just because they can’t find him the right costar. No, Drew bats his eyelashes and convinces everyone that the movie’s writer should play Drew’s not-so-straight man.

Aspiring writer Steve Sopol has never had a screenplay optioned. Now, one of Hollywood’s hot-test properties wants to be in a movie Steve hasn’t finished writing – and he wants Steve as his costar. Turns out the chemistry between them is undeniable – on and offscreen.

Drew swore off dating in the biz, but Steve is the whole package: sharp, funny, humble, and cute. For Steve, though, giving in to the movie magic means the end of the privacy he cherish-es.
Will the credits roll before their ride into the sunset?

Review: His Leading Man by Ashlynn Kane is from the Dreamspun Desires line, so the blurb (and the story) was exactly what I expected, a really light, sweet romance. This is a fairytale Hollywood romance between one of the most popular, in demand actors, and the indie screenwriter/script doctor he cons into playing his leading man. I’m pretty sure I know the author, Ashlynn Kane, from Dreamspun Desire stories – I really don’t know – but the story was enough to draw me since I have read this before and enjoyed it. I was just super keen to hear the audio.

The narration is done by Kenneth Obi. I know his work mostly from listening to Dreamspun Desire and Dreamspun Beyond audios and I haven’t come across a performance that I didn’t like. Not so long ago Obi was a new narrator to me, but I have now come to look forward to listening to his work. He’s really good at injecting the necessary emotion, the highs and the lows and keep me engrossed.
The story surrounds Drew Beaumont, a Hollywood superstar and Steve, a script doctor and script writer who wants to make his own way in the world without depending on the popularity of his family.

Drew Beaumont has been cast as all the usual hero and romantic roles before. He wants to get his teeth into something different, something that will challenge him as an actor. He finds that when he reads the script of an unknown screenwriter. It’s something of a buddy comedy that ends with a gay romance. Drew wants to star in this movie and make it happen at any cost. The only problem is that he can’t find an actor that fits the role of his best friend/love interest. And so that is when he manages to get his agent (and a good friend to Steve) to convince the writer, Steve Sopol, to add acting to his repertoire.

Steve isn’t an international man of mystery, or someone with stars in their eyes or a shady past. There are a couple of surprising revelations about Steve, but other than that, he is a nice, down to earth sort of guy. He does live with his mother, who is always flitting around, but that does not make him a mama’s boy in the least.

Steve and Drew have a wonderful instant chemistry but thankfully they foster it and don’t rush into romance or any I-love-yous. If you don’t like insta-love, this book will still appeal. They need to navigate their way through Hollywood to become that fairytale couple that it was obvious they would become. I recommend this book to anyone who loves a good Hollywood style romance.