Hi guys! We have L.C. Davis popping in today with his new release His Taken Omega, we have a great excerpt and a brilliant giveaway so check out the post and enter the giveaway! <3 ~Pixie~

It is a standalone within the Mountain Shifter universe.

Nicholas wants nothing to do with omegas, and Avery has already signed a contract binding him to another Alpha. Fate has other plans for them both.

As the omega spokesman for the infamous Futurus Initiative, Avery Callahan is a controversial figure who’s used to being envied, occasionally despised and always the center of attention. His kidnapping at the hands of the twisted omega at the helm of the radical anti-Futurus group known as Epsilon shook his perfect world to the core, and Avery’s abnormally conventional parents no longer know what to do with him. In a last-ditch effort to save their son’s reputation—and his engagement to a prestigious politician—the Callahans send him to the small, idyllic pack of Southbend for some much-needed rest and recovery.

When Avery arrives in Southbend, he finds the Meyer household anything but welcoming and he immediately clashes with the rakishly reluctant head of the household. Nicholas might be a brilliant lawyer with good looks and charm in abundance, but he makes no secret of the fact that Avery is persona non-grata in his pack. How is Avery supposed to heal his own wounds when an Alpha who looks at every omega with disdain makes him question everything, including his participation in the breeding program he’s devoted his life to promoting?

Nicholas has it all on the surface—rising-star status as an attorney with his own practice, a sizable inheritance and the option of going home with any omega he chooses at the end of the night—but beneath the mask of his status, he hides a secret that makes him feel unworthy of the title of Alpha. Past abuse has left him with a deep-seated revulsion towards omegas, the very class of shifter he’s supposed to crave. He uses work and meaningless flings with other Alphas and betas to distract himself from the family life he

doesn’t believe he deserves, but in the wake of his estranged father’s death, Nicholas is called home to take on a role he never wanted. “You look especially nice tonight,” Hayley said in a tone that was half-accusatory and half-amused as she leaned in Nicholas’s doorway.

The Alpha scowled. He wasn’t thrilled about the fact that his baby sister was about to be surrounded by single Alphas, most of whom he had already deemed too old for her, especially since his attention during the party would be divided between Avery and his new alliance. His father would have put his foot down about such an appearance until Hayley was old enough to take a mate, at the very least. Her wellbeing was one of the few subjects on which the late Alpha and his son had ever agreed, but their mother had other ideas. Sometimes Nicholas thought she’d be happy to send Hayley away immediately, as long as the marriage proved beneficial to the family.

“Doesn’t that dress come with a shawl?”

“It’s eighty degrees outside and there is nothing wrong with my dress,” she said flatly. “Who are you trying to impress with your hair slicked back like that, Avery or the other Alphas?”

“You should know the answer to that,” he muttered, closing the door behind him as he left the room. “I expect you to be on good behavior tonight.”

“Someone has to be. Let’s just hope Myron doesn’t go overboard on the wine again.”

Nicholas sighed. “If it’s not him, it’ll be mom. Let me worry about them, you just have fun.” He frowned. “Actually, I take that back… who are you going with again?”

“My friend, Shaina,” she said with a sigh, letting him lead her downstairs by the arm.

“You say that like it’s supposed to comfort me. She’s still an Alpha, last I checked.”

“If only everyone else knew the great, unflappable Nicholas Meyer frets endlessly over his little sister,” she teased. “You might seem almost human.”

He stopped at the bottom of the stairs as Hayley gathered the hem of her gown so she wouldn’t trip, and when he looked up, the sight of Avery waiting by the door nearly tripped him. The omega was dressed in an elegant white suit, his dark curls falling freely over the fine silk. He looked the way Nicholas had always imagined an angel might, even if he turned into a devil the moment he opened his mouth.

Hayley leaned in and whispered, “Pick your jaw up off the floor and escort your date, big brother.”

Nicholas cleared his throat of the cluster of frogs that seemed to have lodged in it and walked over to Avery. “You look…” Was there a word for it? Certainly not one that would allow him to keep his facade of apathy intact. He settled for, “nice.”

“Careful, I might get a superiority complex. As an omega, I’m already prone to those,” Avery said in that dry tone that was so much sweeter than any other omega’s attempt at being sultry.

Nicholas had hoped that by being cold towards his guest, he would be able to overcome his innate attraction to him, but he was starting to fear he was just developing a thing for snark.

L.C. Davis is an MM romance author with a passion for LGBT representation.

His series include The Mountain Shifters, Queer Magick and Kingdom of Night. 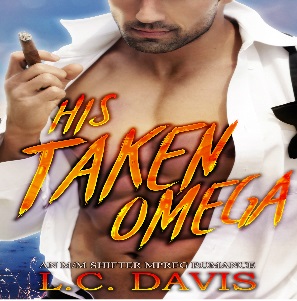