Hi peeps, we have S.J. Himes visiting today with the tour for her new release The Solstice Prince, we have a great excerpt and a brilliant giveaway where four lucky readers can win their own copy of The Solstice Prince. So guys, check out the post and enter the giveaway! <3 ~Pixie~ 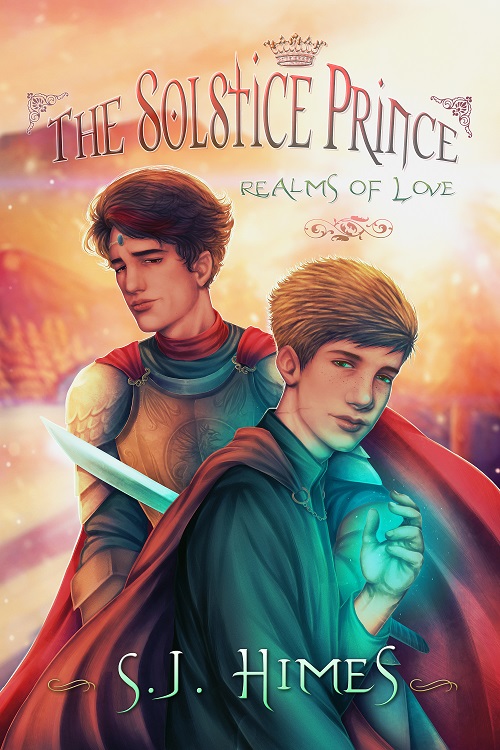 Rescued from slavers, healer novice Jaime Buchanan finds himself alone and free in Pyrderi, a kingdom of magic, mythical creatures, and a culture as open and kind as his homeland was cruel and close-minded.

Despite his rescue, Jaime is not left without scars, both mental and physical. Traumatized by his experience and hiding his gift, Jaime struggles to earn his place in the kitchens of Angharad Palace, the heart of Taliesin City. His former life as a student of the healing arts leaves him at a disadvantage in the kitchens, and his damaged state is becoming more apparent by the day.

One day, when necessity and fate intervene, Jaime meets someone unexpected—Prince Maxim, youngest son of the Pyrderian king, a sword master and a devastatingly kind man. Unaccustomed to powerful people with compassion and heart, Jaime flees. A cascade of events reveals Jaime’s hidden talents of healing, and he finds himself not in chains, but at the beginning of a new life.

This swift change of fortune opens Jaime up to new possibilities, including a smitten prince who cautiously courts Jaime, easing him away from his fears and reminding him that compassion and love can make him strong. The winter solstice is quickly approaching, and Prince Maxim shows Jaime the enjoyment and excitement to be found in a land that embraces the ice and cold, and the mysteries of all things magical. He learns to see the man under the royal mantle, and Maxim is more than even Jaime suspected.

The winter solstice is nigh when tragedy strikes, and Jaime learns that his past of grief and sorrow can be a pillar of strength for his solstice prince. If there is one thing that Jaime believes above all else, it is in the healing power of love. At some prearranged signal, the crowd began to quiet, faces turned towards the canopy where the royals sat. Janis stood and moved to the rail, lifting a hand to the crowd. The people cheered, clapping and shouting the crown prince’s name. Prince Janis was popular with the people if he garnered that kind of reaction— this was not the forced greeting given to a leader that was feared or despised. Jaime still did not know who the king was of Pyrderi, but the future King was well-liked, perhaps even loved.

The people quieted and Janis shouted, his words echoing through the cloud air. “Greetings citizens of Taliesin City! On behalf of the royal family and my father, the king, I welcome you to the first official day of the Solstice Festival! Today is cold and the wind is sharp, so I’ll not waste any time! Would the priests please light the solstice fire, and let the festivities begin!”

The crowd roared in approval and there was a burst of smoke across the square. Two men and a woman dressed in gray robes were standing at the base of a large metal structure about the height of a tall man. The woman was cradling something in her hands that billowed out dark gray smoke and she tossed it into the weird structure. Bright orange flames promptly rose and the crowd cheered again. The royals clapped in approval and Jaime hurriedly copied their example, though he had little idea of what was going on.

Maxim leaned down and spoke in his ear. “The priestess is a Magi and she lit the torch with her magic. The torch represents how life endures even in the depths of winter. The winter solstice is in a few days with the festival ending with the grand ball at the palace. The winter festival here in Taliesin City draws in celebrants from around the country and even from some of the islands in the Straits.”

Jaime blushed when Maxim pulled back and gave him a swift wink and a charming grin. “Janis needs to stay and let the people see him for a while, but the twins are about to escape the cold and we have a tour to finish. The first day of the festival is just the opening ceremony since a lot of people are still arriving. Do you want to stay or would you like to finish the tour?”

“The tour sounds like fun, if you’re sure we won’t be missed.” Any time alone with Maxim was worth the icy chill.

“You two should escape while you can,” Janis said, having overheard Maxim. “I’ll be here until the cold gets too much, talking to courtiers and the like.” The crown prince stood over Jaime who blinked back up at him in surprise. For such a large man, he moved with surprising subtlety. Janis motioned to the lower levels of the stands, and the courtiers below were indeed standing and heading for the stairs that led to the royals’ box. “Unless you want to stay and get fawned over by the masses, Maxim?”

“I’ll save that for you, dear brother. Enjoy your day, and welcome home.” Maxim helped Jaime to his feet. Jaime was at a loss for how to respectfully say goodbye to the crown prince, but Maxim solved this by tugging him away with a casual wave to his brother and the twins, who hardly paid them any heed, tossing back small waves of their own before they went back to talking. Janis grinned at them both and tipped his head towards the stairs.

Maxim took hold of Jaime’s hand and took off for the stairs. They hurried downward until they came back to where the sleigh had dropped them off originally. There was a sleigh waiting for them pulled by the same strange creature Maxim called an oryx. Maxim helped Jaime up into the carriage and jumped in behind him. The driver snapped his whip, and the sleigh jerked into motion.

Their visit to the festival might have been quick, but Jaime didn’t mind. The way Maxim held his hand, tight and firm, like he never wanted to let go, filled Jaime with warmth and a slow burn under his skin, heating his cheeks in the chilly air. The prospect of spending the next few hours in Maxim’s company was incomparable to anything he’d experienced in his short life. Not better than the day he was freed from the slavers, but it was close.

Falling in love felt like learning how to live again. I’m a self-employed writer who stresses out about the silliest things, like whether or not I got my dog the best kind of snack and the fact my kindle battery tends to die when I’m at the best part in a book. I write mainly gay romance, erotica, and urban fantasy, with occasional forays into contemporary and paranormal. I love a book heavy on plot and character evolution, and throw in some magic, and that’s perfection. My current series are: The Beacon Hill Sorcerer, Bred For Love (as Revella Hawthorne), The Wolfkin Saga, and the epic fantasy romance series Realms of Love. My last two novels in the Beacon Hill Sorcerer won 3rd Place in the Gay Fantasy category for the 2016 Rainbow Awards.

I live in New Orleans, where the personalities are big and loud and so are the bugs! New Orleans is rich in cultural history, and the flavor and music of the City is impossible to hide. Before that, I lived all over the United States: Tampa, Western Massachusetts, Indianapolis, and on and on…. I’m a nomad, and I’ve yet to find a place that calls to me strongly enough to become home. My faithful travel companions are my dog Micah, the numerous voices in my head who insist they all get put on paper, and the wind at my back.

Sarah Jo Chreene is a 23-year-old resident of Dallas, Texas, where she works part-time in an antique shop, which is one of her dreams jobs. Sarah Jo delights in meeting new people, interesting personalities, unique restoration projects, and the atmosphere of the shop inspires her muse. Her other passion, and one she devotes most of her time to, is her art. She sold her first piece at the age of 17, and hasn’t stopped since.

Her professional portfolio includes the self-titled album cover for the popular Texas band, Thieves of Sunrise, and will be working with the band again on their third album cover. Sarah Jo has worked with international best-selling romance author Riley Hart, doing a wide range of projects from promotional artwork to interior illustrations, and artwork for Hart’s alter-ego, Nyrae Dawn, in the YA novels The Weight of Destiny, and Turn the World Upside Down. Sarah Jo’s most recent collaboration is with urban fantasy author SJ Himes, creating the cover art, design, and interior illustrations for The Solstice Prince, the first novel in The Realms of Love epic fantasy romance series. Sarah Jo will also be creating the interior artwork for the remainder of the series, a project for 2018 and 2019.

Sarah Jo loves to work in a variety of mediums, including digital painting, Photoshop, charcoal, pens, pencils and freehand sketching and painting in a wide range of styles from anime, sketchy, realism, and cartoons. Sarah Jo ranks Norman Rockwell as a primary influence for his evocative use of emotion and his beautiful portrayals of humanity.

Between professional commissions, Sarah Jo delights in creating private artwork based on personal requests, from original characters, to portraits, and has brightened the walls of many patrons over the last eight years of selling her work.

For examples of her work, Sarah Jo is on Instagram, DeviantArt, and Facebook. She is accepting commissions for a wide variety of projects, and can be reached through social media and the following platforms: 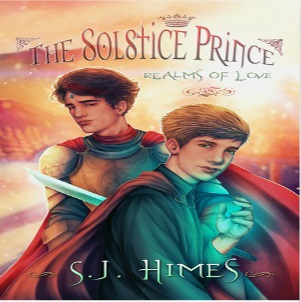 Win an Ebook of The Solstice Prince!
(4 winners sent via Instafreebie)