Hi guys! We have Heloise West stopping by today with her new re-release Hitting Black Ice, we have a great excerpt and a brilliant $10 NineStar GC giveaway so check out the post and enter the giveaway! ❤️ ~Pixie~ 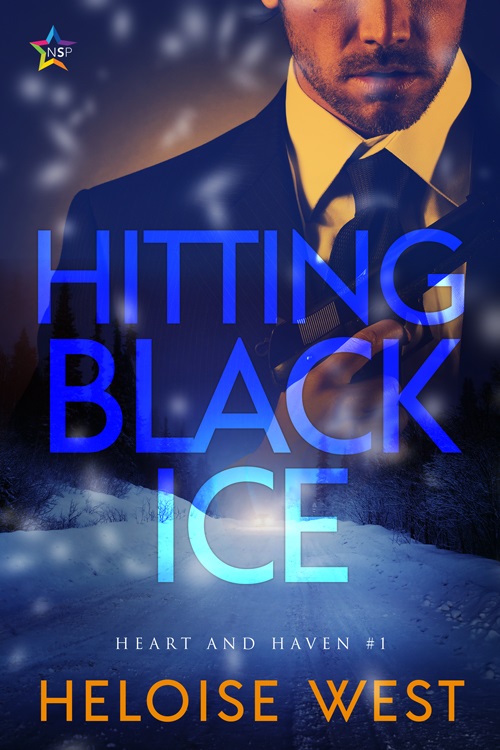 Shawn is on the run from the law and love, to protect himself and anyone else involved. Until he meets Hunter, and he no longer wants to run.

ER physician’s assistant Hunter guards his heart carefully, but that doesn’t stop him from falling for the temp front desk clerk. He keeps his distance from relationships for a good reason but just can’t help himself when it comes to Shawn.

Forced into a hostage situation, buried passions explode in the aftermath, and sex in the supply closet brings both their hearts back to life. But as they explore their relationship, the past catches up with Shawn.

FBI agent Nick Truman has finally found his man, and when Shawn escapes, he focuses his attention on Hunter. Will Shawn sacrifice himself to save Hunter from the man who framed him for murder?

Hunter had a crush, a big one.

In the cafeteria late one night on his break at the hospital, he sipped at a coffee and focused on Shawn, the night desk clerk for the ER, sitting a few tables over. With long black hair tied back neatly and eyes of faded denim blue, Shawn had a lean body, his face long and bony. Tonight, he wore a brown turtleneck under a white-and-green-striped button-down. The rolled sleeves revealed muscled forearms dusted with golden hair, as mismatched to the dyed black hair as his pale eyebrows and lashes. A silver skull ring and silver studs in his ears appeared at odds with the lanyard and dangling ID card.

Hunter drank more coffee, barely tasting it. He’d tried to talk himself out of it, but he couldn’t squirm away from the attraction. When he’d walked past the registration desk to the water cooler—again—or hung out there a moment too long with an empty clipboard in his hands, he caught those tiny flicks of interest in Shawn’s eyes. Hunter must have given away his interest, because the nurses smirked at his pretended obliviousness.

He bent to the not-very-engrossing crossword in the newspaper, imagining what tattoo might lie beneath Shawn’s cool demeanor. Maybe gargoyle wings across a broad and muscled back, or a snake wrapped around his thigh. Something more esoteric—a phrase in Latin, like Hunter’s own primum non nocere, or a bit of wisdom in Chinese characters. Or an old-school Aerosmith tat? Hunter glanced up from filling in the little squares with black ink blocks. He could have sworn Shawn hurriedly dropped his attention down to the paperback in his hands. He turned the page and shot a second glance at Hunter. Gazes locked and jumped away.

Heat rushed through Hunter all at once and climbed up to his face. Too aware of the black-haired man with biceps to die for and long legs to—well, never mind. Taking a boner back to the ER was not a good idea.

He had touched those biceps once when he gave Shawn a flu shot back in the fall. Shawn had taken the needle without a flinch.

Shawn stood with his tray in hand and walked toward the trash container behind Hunter. The back of his neck prickled as if Shawn breathed on the little hairs there. Hunter picked up his coffee cup once more but tasted only the dregs.

Good thing he’d decided to become a physician’s assistant and not an actor. He didn’t talk to Shawn unless he had to, the worst giveaway of all. No shy bones in his body, yet he feared conversation led to more conversation, to flirting, and the next thing he knew, they’d be going on a date, Hunter falling head over heels, and then the asshole—

Stop. You know how the story ends.

Behind him, Shawn cleared his throat. Hunter didn’t turn around. Shawn returned to his seat, picked up the paperback, and slumped down into the chair with a scowl.

Marisa slipped into the seat across the table from Hunter, and he smiled.

“I’m onto you,” she whispered.

“Uh-huh.” Hunter moved his body slightly so he could still see Shawn around her.

“You’ve been taking late lunch for three weeks now. I know why—or who.” She smiled, a small Hispanic woman with curly chestnut hair framing her heart-shaped face and hazel eyes. If Hunter weren’t himself, and she weren’t married, he thought he’d be with her. Her lips always gleamed with gloss, and her eyes snapped with fire when she got pissy. He loved it, most days, even when she aimed for him.

She leaned toward him. “Shawn, right?” Her eyes took on a warning snap now and dared him to contradict her.

“I don’t even know if he’s gay.” Which wasn’t true, but he knew better than to deny it to her face.

She sipped at her coffee with her gaze on him. Her mouth left lipstick smiles on the rim of the cup. “There’s something different about this one. And he’s lovely to look at.”

“Lovely.” Hunter snorted. Dead sexy Shawn. Hunter spied him out at the clubs twice now but avoided him there too. Shawn undulated like liquid fire across the dance floor.

“Please. Don’t.” He must have spoken louder than he meant to. Shawn glanced at them and away again.

Hunter slapped the magazine down. “I’m too sober for this conversation.”

Mindful of the potential audience, he lowered his voice. “You’re jumping way ahead here.”

She shook her head. “I know you. You have so much love to give, and I hate to see you suffer.”

Her probing questions about Hunter’s past, family, present situation were all familiar ground. Friendship he could manage; he recognized it when it was offered to him. He’d been out since he was nine. Always been out was what he told people. She was one of the few friends to whom he could confide nearly everything. Jerry’s addictions had killed him, but his family and friends blamed Hunter, and on a deeper emotional level, he blamed himself too. Marisa knew this, and it worried her. She wanted him to find love and move on, be part of a couple. She knew, but she didn’t understand.

He wasn’t abstinent now, not at twenty-five, and never got involved with anyone beyond one- and two-night stands. Hunter didn’t want to take responsibility for another heart.

When the tide of emotion and memory washed through him and left him able to speak again, he said, “I’m not suffering here.” He kept much of the darkness at bay with whiskey and anonymous sex. Who needed Prozac with a warm, muscled body in the bed?

“Maintaining.” It had been a far prettier day in May, eight months ago now, when he walked out of the ER at Boston General to Jerry waiting for him in the parking lot with a gun.

“Ask him out on a date. An old-fashioned date where, at the end of the night, you kiss him good night.”

“Don’t get angry.” She patted his hand.

He whipped it away. “Too late.”

Marisa sighed. “I’ll make it up to you. Toni, Anna, and I are going to Twisters tonight. I’ll buy you a drink.”

Hunter gathered up his tray. He liked the ER crowd. They always had fun when they got together in off-work hours, and he agreed to meet her at Twisters before hitting the clubs.

When his shift was over early in the morning, he drove back to his apartment and crawled into bed as the day glowed behind the blackout curtains. The end of the week had left him exhausted, and his sleep was blessedly dreamless. Heloise West, when not hunched over the keyboard plotting love and mayhem, dreams about moving to a villa in Tuscany. She loves history, mysteries, and romance. She travels and gardens with her partner of fifteen years, and their home overflows with books, cats, art, and red wine.