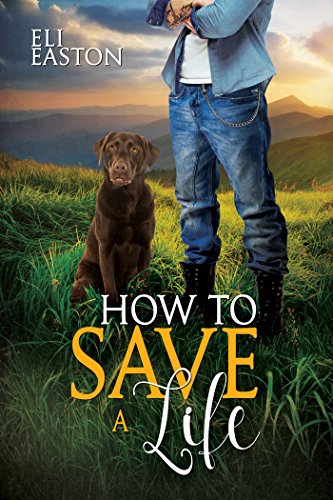 Title: How to Save A Life

Series: Howl to the Moon 04

Blurb: Rav Miller looked into the terrified, intelligent eyes of the chocolate Labrador on death row, and knew he’d do anything to save him. When the dog, Sammy, escapes and heads to Mad Creek, Rav follows. Mad Creek. The town had become legendary in Rav’s mind after he’d met that bizarre group last year. Rav dismissed his crazy suspicions back then, but when he arrives in Mad Creek, he knows it’s true. Dog shifters exist, and apparently they all live in the California mountains. It’s enough to blow a bad boy’s mind.

Sammy has something in common with Rav—neither one of them trusts people. After Sammy’s abuse as a dog, he particularly dislikes tough-looking men like Rav. But when Sammy gets a chance to work with rescued dogs at the new Mad Creek shelter, his deep compulsion to help others overcomes his fear. Rav and Sammy bond over saving strays. If they can each find the courage to let someone else in, they might find their way to love.

Sheriff Lance Beaufort doesn’t like humans moving into Mad Creek, especially not the tattooed and defiant Rav. When Rav starts a rescue shelter, the town thinks he’s wonderful! But Lance isn’t fooled. He doesn’t buy Rav’s innocent act for one second. How much does Rav know about the quickened? What is his game? And why did he have to show up now, when Lance and the other town leaders are overwhelmed by all the new quickened pouring in?

Rav knows how to save a life. But can he save an entire town? Can he rescue Mad Creek?

How to Save A Life is the fourth book in series Howl to the Moon by Eli Easton. I adore this unique series. It is sweet and while there is plenty of drama and misunderstanding, which fits since there are characters who have not always been human and some only recently transformed. However, there is not a lot of angst, which is something that I liked a lot, and I felt it really fit the bubbly personalities of dogs that had been completely adored in their time before they transformed.

Rav Miller is a man with a mysterious past. He had left his life behind to help dogs by opening and running a dog shelter. He has a deep passion for helping dogs, especially those in kill shelters. For the past year the strange encounter he had with a group of men – and a couple of their dogs – from Mad Creek had him intrigued with the town. The mystery deepens for him when a new dog that he rescued, Sammy, runs out of the shelter and makes it all the way to Mad Creek on foot. Rav follows Sammy chip and is intrigued by the town. He can tell that there is something different and when ideas and bizarre suspicions are formed in his head, he figures out what is going on all on his own.

Rav is very much an alpha male and when he sees the situation in Mad Creek (high unemployment), he wants to fix it, that the town is populated by people that can shape shift into dogs gives him the idea. Having decided to start another shelter, this one in Mad Creek, Rav also has to deal with disapproving and grumpy sheriff, while trying to get glimpses of the skittish man called Sammy. But the shelter isn’t going to help the town financially and he has to deal with sheriff who is extremely grumpy and overprotective of his people – it’s definitely a clash of the alphas!

Sammy is newly quickened, he has had two owners that loved him. One of them had died and the other is a victim of domestic violence. Sammy was in a kill shelter when another quick also at the shelter told him about Mad Creek. After he was saved from the kill shelter by Rav, Sammy escapes Rav’s shelter and heads to Mad Creek. He goes for the job advertised at the new shelter, the caring and loyal nature of his dog half helps him to overcome his fears. Now working with Rav side by side the two men have a lot to learn.

I will admit that this is not my most favourite book of the series, but it’s still pretty damn good. I don’t know why, I think that I found it a little difficult to connect to Rav, it’s the only thing that I can think of. I think I also found it a little odd how he randomly decided to pick up his entire life on what seemed to be a whim.

A final side note, because I was surprisingly slow about this realisation, but I just managed to link all the titles in this series to a song. Although not all the songs have the “how to” in the song title, that’s just minor details. This epiphany happened started because I got the song How to Save A Life by The Fray stuck in my head, I already have Wish Upon A Star from Pinocchio stuck in head. Then I remembered that song by The Script called Howling at the Moon and then it just snowballed from there. Done! I’m happy I got that out and I’m kind of ridiculously happy about it.

I adored this story about Rav and Sammy. Sammy is so sweet and cute yet has been abused by a previous owner then taken to a pound. When it’s almost his time to be put to sleep Rav takes him in. From there Sammy escapes and heads to Mad Creek where Rav follows.

Things are not smooth for these two. Rav has to get Sammy to realize not everyone is out to hurt him. With Lance not trusting strangers Rav has a way to go in getting the town to trust that he will keep their secret. It helps when he figures out a way to bring in much needed revenue an jobs for the town.

Adorable, sweet and cute this story had me in tears at times. I loved the way the story progressed and ended.