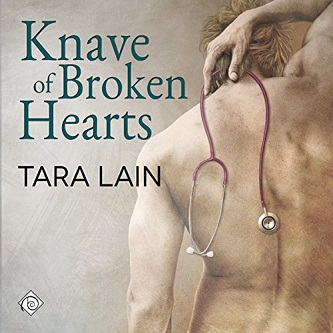 Blurb: Jim Carney has a full time job – running from himself. Since he walked out on his wealthy family at 16 because he’d wrecked his best friend’s life over some yaoi graphic novels, Jim has lived a macho, blue-collar existence of too much booze and too little responsibility. Then Billy Ballew, the man Jim most admires, gives Jim a chance to come through as his construction supervisor. For once, Jim is determined to make someone proud. Then Jim goes in for a physical for his new job, and his yaoi dream comes to life in the form of cardiologist Ken Tanaka. Jim discovers he has two heart problems – a wonky mitral valve and a serious attraction to his doctor. But Ken is a major player, and Jim might be just a notch on the doc’s stethoscope. To Ken, Jim is unforgettable – but the living embodiment of his traditional family’s worst nightmares. How come the minute Jim decides to be responsible, he finds himself taking care of his kid brother, getting a proposal from a wealthy woman, making a deal with the devil, and winding up in the hospital – when all he really wants is the knave of broken hearts?

Review: Knave of Broken Hearts is the second book in Tara Lain’s Love in Laguna series. I would suggest reading this series in order, because it would make it easier to understand the large cast of secondary characters that we are getting to know. I love Tara Lain’s writing, I find it so easy to connect to, but in saying that I do think that I once tried reading a book in this series (without realising it was a series) and didn’t really enjoy it and so just became a forgettable experience.

KC Kelly, who is performs the narration for the audio of this series has done an excellent job for the second book. There is nothing really that took away from my enjoyment of the book, it was just so easy to connect with the characters when I started listening to this book.

The characters of the book are Jim Carney and Doctor Ken Tanaka. Jim was actually in book 1, a close ally and now friend to Billy Ballew. In fact, Jim now works for Billy after Billy took the big step to start up his own contracting business. Jim starts the book in a really down position. Being in the closet means that although he has been supportive of Billy, he feels like a liar and begins to revaluate his life as his new job begins to take off. To top it off, he has a tonne of baggage when it comes to his family as well, who he hasn’t seen in years. It just so happens that the doctor’s appointment that he has to attend for the new job leads him to the office of cardiologist Doctor Ken Tanaka.

Ken comes from a very traditional Japanese family. His parents love him and are endlessly proud of his professional accomplishments. In fact, his mother loves him so much and is so traditional, that now she has accepted that her son is gay, he is going to find him a good Japanese boy to marry. Because… well, tradition. But Ken is conflicted when it comes to his attraction to Jim, after all Jim is a patient as well as being a man who is struggling even more than Ken. But the two men, once thrown into each other’s orbit, cannot do anything but get back together.

However, it isn’t all roses. Ken is confused by his feelings for a man who would not pass muster with his parents, no matter how accepting they are. Ken has concerns for Jim’s health. Jim is struggling to become the better man he wanted to become. Jim also has to deal with his estranged family when his little brother arrives on his doorstep, desperate for help from his big brother (the two had never been close, due to their age difference). The guys have a lot of growing to do before the spark between them becomes a blazing fire.

Once again, I’ve loved the in-depth development we see of the MCs, but also love the support and getting to know the secondary characters in this book. I see that one character being in closet is the theme in this series. I don’t think its necessarily a bad thing because all the characters are very different have their reasons for staying in the closet, oh, and there are a lot of blue-collar construction workers. It is only when they fall in love that they realise that they can live in freedom. It’s a really sweet, heart-warming series, with really down to earth characters so far.