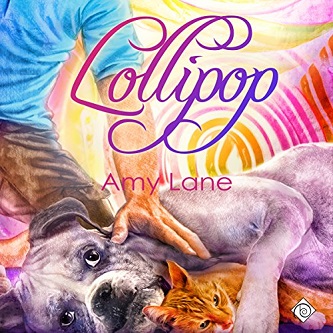 Blurb: Ezra Kellerman flew across the country to see if he had another chance with the man he let slip through his fingers. He didn’t. Rico has moved on, but he doesn’t just leave his ex high and dry. Instead Rico entrusts his family and friends with Ezra’s care. Ezra, confused, hurt, and lost, clings to Rico’s cousin and his boyfriend as the lifelines they are – but their friend, Miguel, is another story.

Miguel Rodriguez had great plans and ambition – but a hearty dose of real life crushed those flat. When Miguel finds himself partially in charge of the befuddled, dreamy, healing Ezra, he’s pretty resentful at first. But Ezra’s placid nature and sincere wonder at the simple life Miguel has taken for granted begin to soften Miguel’s hardened shell. Miguel starts to notice that Ezra isn’t just amazingly sweet – he’s achingly beautiful as well. Suddenly Miguel is fending off every sin-gle man on the planet to give Ezra room to get over Rico – while fighting a burning suspicion that the best thing to help Ezra get over his broken heart is Miguel.

Review: Bitter Taffy is the second book in Amy Lane’s Candy Man series. I’ve have come to enjoy some of Lane’s books and this book is no exception. I find the writing style is really accessible, in that it is well written and very expressive without too much complicated language, so it’s easy to relax and read or listen to the book. The narration was performed by Philip Alces, who narrates the full series. Alces has a soft and gentle voice that matches the sweetness of the plot and conveys the variety of emotions that tumble through the MCs. It was a wonderful performance and completely on point.

Candy Man has a really cute premise. It’s about this almost hippy-like guy, Darren, who runs a boutique candy store in Old Sacramento and just so happens to have psychic visions about the people that he needs to help, i.e. people that are down on their luck and may not be looking for love but are gonna get it anyway. Really cool.

I remember that I tried reading this book years ago without reading – or realising – that there were other books in the series before it. I don’t think it went down well, maybe, but to be fair I don’t remember it at all. Regardless, I’m here to say, I recommend hearing this one in order. Also, I’m here to say that I loved listening to the audio and I loved the story.

Lollipop is a story of redemption in a lot of way. Ezra is the ex of Rico from book 2, Ezra regrets how he handled things back in New York at his father’s company. Ezra bowed to his strict Jewish father’s wishes. But a mental breakdown changed that and sent him to Sacramento to make amends.

However, Ezra doesn’t allow himself to stop and think what would happen if Rico had moved on, and for those that already heard book 2, you know that Rico has indeed moved on. Instead, he is not only befriended by Rico’s tough looking, ex-army cousin, Adam (who along with Darren and the dog Clopper and cat Jacob, are the common threads for this series) and Adam’s boyfriend, another friend of Rico and Adam’s takes Ezra under his wing.

Miguel Rodriguez has already had one failed business, which took him back to working at the store Candy Heaven. He is very family orientated and is all around a great, fun loving guy. He’s just still bruised by his failed attempt at going into business for himself. But Miguel’s life changes when he meets Ezra while dog and cat sitting Clopper and Jacob. He feels for Rico’s ex and wants to make the guy comfortable. They have an easy friendship and an instant connection. Although they don’t rush into any romance, the friendship is beautiful and patient as both men come to care greatly for the other.

This is another sweet, low-angst romance that is above healing and friendship. A total joy to listen to on audio.