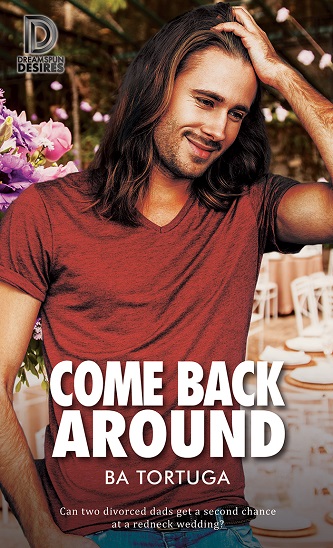 Title: Come Back Around

Blurb: Can two divorced dads get a second chance at a redneck wedding?

When Reid Porter agrees to be his best friend’s man of honor, he never considers that his ex, Mateo, will be there too. Which is ridiculous, because Jennifer is marrying Mat’s brother. Reid would never let Jen down, though, so he finds himself at the Leaning N Ranch with his two daughters and a whole lot of baggage about seeing Mat again.

Mat loves his baby brother and would do anything for him, including face the love of his life, whom he’s sure has moved on. When he and Reid come face-to-face after more than two years apart, they realize they’ve never let go. Now they have to do what they never could before—balance work, home, and children, while finding a way to come back around to each other’s love.

Review: Come Back Around, by BA Tortuga, is the fourth instalment of the series Leaning N. I don’t believe that the books need to be read in order, although I would say that people should at least read the first book because that is the introduction to the guys on the Leaning N ranch, which now operates as a destination for LBGT+ weddings and the like.

Now, I love BA Tortuga. I really enjoy Tortuga’s writing and always look forward to a wonderfully sexy cowboy romance, some books are sweet, some are angsty, some have a touch of mystery. There’s always something to enjoy as long as you love a cowboy! However, although I did enjoy this book overall, I had a couple issues with the main plot which had me unable to really suspend my disbelief.

I’ll explain why after I do a quick overview of the plot.

The plot is quite simple. A wedding at the Leaning N ranch brings together ex-husbands Reid and Mateo. The wedding is for Mateo’s brother and Reid’s best friend, where Mateo is best man and Reid is man of honour. They have two daughters together, who they had through surrogacy, but they haven’t seen each other in two years. In that time Reid panicked and took his daughters away to another state, causing an ever-bigger gulf between the two men. While Reid’s life has changed and he has gone from struggling artist to an artist in high demand, Mateo has gone through his own personal issues. Their time at the Leaning N ranch, even with their families making their opinions known, is a time for them to reconnect and realise what is best for them as a couple and what is best for the children, who have undeniably suffered from the absence of their papa.

So now the reason why I found this book less enjoyable compared to other books by Tortuga. First off, I found the two years apart difficult to swallow, especially with their daughters, but mostly of their frustrating miscommunication. I do not like miscommunication storylines as a general, and unfortunately for me, this is where the book fell short for me. I also felt really frustrated because I kept thinking that Mateo needed Reid’s help, but Reid appears to have a penchant for acting before he thinks.

Despite this, I did like the characters a lot. Mateo is really likable, although at the time of their separation he was a over-stressed business man who needed to talk more to his husband. Reid is equally as likable, but he is too quick to jump to conclusions and is very hot-headed, forgetting that something as simple as talking could help them a long way. But in the end, the guys have learnt a valuable lesson. The love has never gone, but they needed this second chance to get to know each other again.