Hi guys! We have W.S. Long popping in today with the tour for the Love & Mystery Boxset, we have a great excerpt, a fantastic giveaway and Shorty’s review, so check out the post and enter the giveaway! ❤ ~Pixie~ 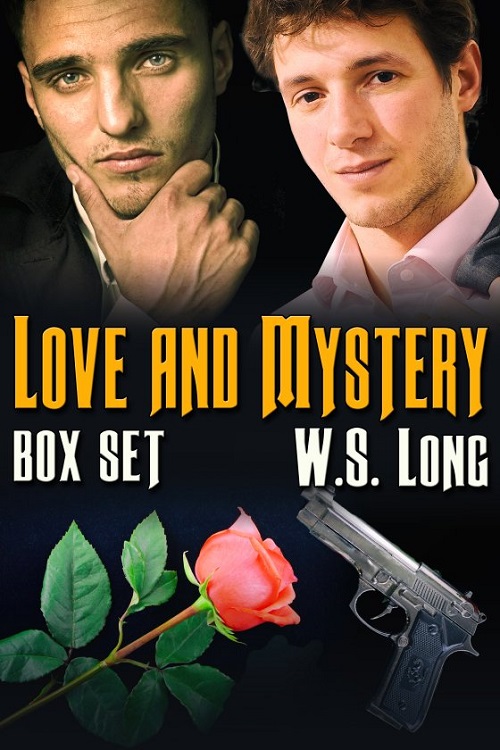 Love and Murder — Jake Chandler is a struggling small-town Florida lawyer, and his life is falling apart. His ex-wife makes seeing his daughter difficult, his boyfriend Noah may be cheating on him, and his money woes are growing. Jake hopes that a new murder defense case will help with his money woes, but his ex-wife Elena is the prosecutor. It’s bad enough she has to fight with him over custody of their daughter. Now she wants nothing more than to beat him in the courtroom, too.

And then people around him start dying.

First, an ex-lover gets his brains blown out while he and Jake have coffee. The danger comes even closer. Then Jake meets handsome FBI agent Xavier, who is investigating the crimes surrounding him. Can Jake trust this new man in his life? Is Xavier who he says he is? Or does his involvement put Jake and those he loves in even more danger?

Love and Pain — After their too-thrilling courtship that included capturing his former lover’s killer, Jake Chandler has started a new life for himself with FBI agent Xavier. Living together is wonderful, but moving to Washington D.C. has resulted in temporary jobs that don’t last long. When Jake finally lucks out on a too-good-to-be-true position with a big law firm, Xavier suspects Jake’s new boss is crooked.

With some sleuthing, snooping, and close calls, Jake gets deeper into trouble at work, and conflicts with Xavier make his world start to crumble. When a key witness is shot to death in front of Jake, they both begin to realize how high the stakes are. Can Jake and Xavier get through these threats and find happiness with each other?

Light posts adorned with holiday decorations lined the road to Ivan’s apartment. I told Ivan I would stop by his apartment to pick him up for dinner. But, traffic from the nearby shopping mall didn’t help.

Ivan didn’t answer his cell. I wanted to tell him how late I was running.

When I finally pulled in, Ivan stood outside with three police officers. One police vehicle blocked his car. I nodded to Ivan as I approached. His arms were crossed while an officer asked him questions.

“So could you tell what was taken?” the one officer asked.

Ivan looked towards me while he spoke. “No. I haven’t done a full inventory but the TV’s still there. I had some loose cash. That’s gone, and some clothes.”

“I saw you had a gun safe — anything missing?” the second officer chimed in.

“It looks like someone tried to get in it, but everything’s there,” Ivan said. “I was on duty so my Beretta was with me. Had the gun safe. Don’t have any other guns.”

Don’t have any other guns.

Ivan stared at me, watched me as he had said this.

I averted his gaze.

Another officer chimed in. “That’s good. Can you imagine the paperwork you would have to fill out if your weapon was stolen?” The first officer shook his head. “Well, you know with the holidays, there’s a rash of burglaries. We’ll follow up on it. They should be done dusting the fingerprints in a few.”

“All right. Thanks,” Ivan said, as he shook hands.

As the officers moved away. I came closer.

“Everything okay?” I asked.

“Well it’s been a crappy day,” Ivan blurted. Veins on his neck stood out as he spoke. “Before I came home, your ex-wife called Bush and told him you got Frank Peoples back on the street. Then I come home to this mess,” he shouted, waving his hand in the direction of his apartment. “The chief thinks it looks bad someone else’s DNA’s on that stupid mug, and he’s taking it out on us. Me.”

“Sorry.” Just doing my job, Ivan. Not your fault.” I stopped. I wasn’t sure but the more I talked the more irritated he seemed. “Sorry about what happened. Anything I can do?”

“I can stick around if you still wanna grab some food.’’

“No,” he answered without hesitation, his face red now. “It’s best that you leave.”

I stood there. His tone and demeanor showed obvious anger. I thought about what I had spoken to Noah about the night before, and felt grateful that I didn’t go through with it.

“Sorry, I didn’t mean to upset you,” I said. He continued to avoid eye contact. I shrugged, then walked to my car. I got in, when I heard him next to my window.

I rolled my window down and he said, “Hey, wait. Sorry I snapped at you.”

“I’ll give you a call later, Jake.” His voice calmer. “Rain check on dinner?”

He shook his head.

Two other uniformed officers walked down the stairs, and Ivan turned his attention to them. One of them carried a paper bag marked “Evidence” with a red seal tape over the top.

I took the only exit out, and waited for the traffic light. When it turned green, I saw a familiar red Jeep parked in a corner in the complex under a tree. A shadow in the vehicle ducked.

“Listen, I can’t explain right now, but I got into Ivan’s apartment.” Win a Ebook of Love and Mystery Box Set!