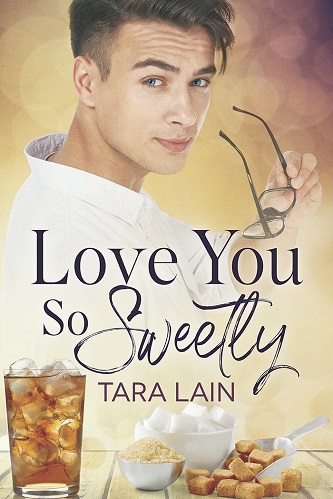 Title: Love You So Sweetly

Blurb: Reading his future in a glass of sweet tea.

The youngest son of one of America’s richest families, Remy Merced is so busy trying to save his family company from collapse, he’s never taken time to figure out if he’s gay, much less if he’s happy. Then his meddling mama hires him an assistant who’s everything Remy thinks he doesn’t want. Cute Harper Treadwell, from rural Arkansas, is a brilliant business prodigy… and openly gay. His wit and charm could confirm Remy’s suspicions about his own sexuality almost instantly—if they weren’t both already partnered.

When Remy’s girlfriend and Harper’s boyfriend get a little too friendly, Remy finds that the path to happiness requires a long drive in an old Prius, a growing appreciation for small towns, and a whole lot of sweet tea. But before they can forge a future—they have to let go of the past.

Review: Love You So Sweetly is the fourth book in Tara Lain’s Love You So series. There is no read to read the series in order as they are completely independent books, although the premise behind each book is that the romance includes one main character who comes from or has wealth/privilege in a high position in a company, and the one main character who doesn’t have any of those trappings, and is just a “normal” person.

I was excited about this book because I have been loving the Love You So books, and they are perhaps my favourite books that are written by Lain. I found the blurb perhaps a little misleading as I expected there to be a stronger thread of plot involving the MCs then current flames, but whatever. I don’t think it took away from my enjoyment of the book.

Love You So Sweetly is a sweet romance, there is no denying that. But for that reason I also loved the book. It follows Remy Merced, the youngest son who is trying to save the family’s massive national company from collapse in the future by revitalising the brand. He’s stressed and over worked and that is the reason why Remy’s meddling mother butts in and hires Remy a personal assistant, the son of a friend from her little hometown in Arkansas.

Harper Treadwell loves the world of business and excelled during his degree. However, he is from a small town and it is only through family connections that he is able to land a job. Not that Harper will complain. He wants to go out into the big wide world, which is partly why he had left town to move in with his boyfriend in California.

Remy has never really had a chance to question his sexuality, though he does date women and currently has a girlfriend. However, despite some early resistance, Remy sees that Harper is everything he could ever need. First he displays his knack of the business world, and later on as they get to know each other and their respective personal circumstances change, there’s a spark that is a lot more than employer and employee.

I love the simplicity of this book, it’s sweet and not overly complicated, which means that we get a lot of depth out of the characters and I really liked the depth of emotion that I felt as the romance progressed. It made it feel real, and fits perfectly with the overall feel of the previous books in this series. I’m definitely keen if there is more to come!