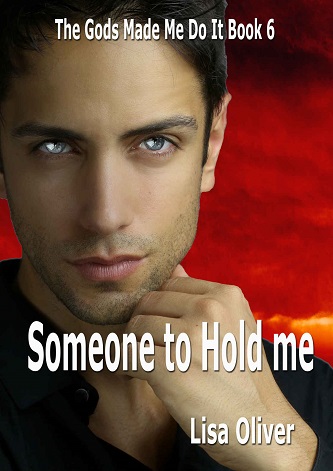 Title: Someone To Hold Me

Blurb: Hades, Lord of the Underworld, has spent years searching the world for his Fated Mate. He’s watched his brother and nephews find their “light” and yet he can’t find his. On the verge of giving up hope, Hades attends his brother Poseidon’s wedding; so outside his comfort zone, but his discomfort proves worth it. Because there, at the reception, he finally sees his light.

It wasn’t that Ali was uncomfortable around wolves – he’d been a good friend of Claude’s for years. But when one of the wolves at Claude’s and Poseidon’s wedding gets verbally pushy, he feels he has no choice but to shift and find the alpha. What he doesn’t expect is to find a beautiful man with soulful eyes, holding out his hand.

After all Ali and Hades have been through in their lives, you’d think the Fates would be kind to them. But between Cerberus’s howling, Persephone’s snarking, and Ali’s family proving there is more to them than their blatant wealth, Ali and Hades have their hands full creating a life with each other. But maybe, just maybe, the Mother has a gift for them after all.

Review: Each book in The God Made Me Do It collection features a different romantic couple. To enjoy the overall story arc and crossover characters, I would recommend reading the series in sequential order.

Hades is the Lord of the Underword giving out the sentences for those with evil in their souls. However he might be a God he still is a man. A man that has been lonely for so long. When he became the Lord of the Underwood even his own family distanced themselves from him. The problem was he was just as good as they were. Fate has found a way to bring him the light he deserves.

Ali is a sweet shifter who definitely has an attitude. He stands up for those who have no one to stand up for them. Now at his best friends wedding he might get the surprise of his life. Even though he gets a sexy God as a mate, he gets some snarky asshats right along with it. Fair warning, Ali has no filter when it comes to his mouth. It is definitely going to be a fun time.

Sweet and sexy, the perfect length to keep me entertained for a few minutes. I got a kick out of Ali, but Hades came off just to much on the downside. He is a god with a heart but he came off as a prey shifter, which is what Ali is. Ali came off as a predator which is funny as hell. I got a kick out of the way he stands up to Hades ex. This story caught my attention from the start and kept it all the way to the end.

I got a kick out of this story and can’t wait to see what comes next.